At a press conference on Monday 29th February, an American student who has been held by the Democratic People's Republic of Korea (DPRK) admitted that he tried to steal a political slogan from a hotel where he stayed before his arrest. 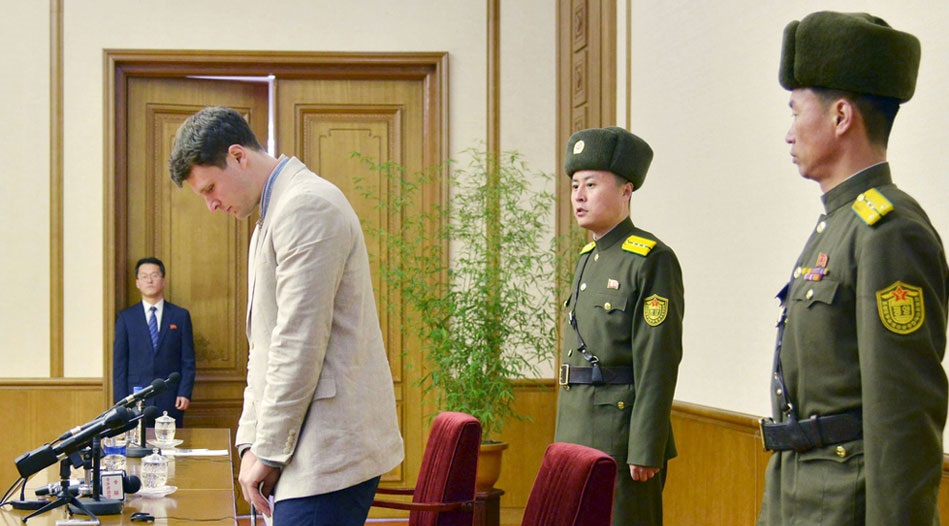 His name is Otto Frederick Warmbier, a 21-year-old studying Commerce at Virginia University.

The student also confessed that he had committed severe crimes against the DPRK and it’s government on New Year’s Day 2016. Little is known whether the confessions were made under duress but it is clear, as shown in the pictures that he is remorseful.

Hope he gets a pardon quickly.

The matter could get worse as he has revealed that he committed the crime for the U.S. government and that the task was given to him by the Friendship United Methodist Church after a promise of good reward.

According to CRI News: “He said that on the early morning of Jan. 1, he attempted to take a political slogan which inspired people’s love for the DPRK from a staff-only area at Yanggakdo International Hotel, where he stayed during his tour in Pyongyang.

“The aim was to harm the work ethics and motivation of the DPRK people,”

Warmbier has constantly apologized to the DPRK and government for his crimes and never stopped begging for forgiveness.

He says that he was only a “political victim of the U.S. consistent hostile policy against the DPRK.”

He also stressed that he was treated in a humanitarian way during the investigation and is now in good health. He said he did not know what penalty he might face, but he fervently hoped he could return home to reunite with his family.

Wambier entered the country under the guise of a tourist.

5 Comments on A US Student In North Korea May Start War.

I have a cell phone that doesn't behave like a phone: It behaves like a computer that makes calls. Computers are becoming an integral part of daily life. And if people don't start designing them to be more user-friendly, then an even larger part of the po