Unfortunately for Barca fans, the legendary Brazil international footballer who is also known as Ronaldinho Gaucho, will not be performing on the pitch as he did a few years ago.

The 36-year-old is now an ambassador for the Spanish giants after sealing a contract last September.

According to Mundo Deportivo, the deal was brought to life through efforts from Ronaldinho’s brother and agent, Roberto de Assis.

The two-time FIFA World Player Of The Year (2004 and 2005) has now joined Barca’s Team of Legends, and will be working in their newly-opened U.S. office.

A meeting between Ronaldinho, Roberto and the club’s president Bartomeu, has been scheduled today 25 January. The parties held their first meeting last October during Barca’s launch of their new Park Avenue office in New York City.

In their bid to establish Barcelona as a force to reckon with in international markets, the club’s management launched an office in Hong Kong two months ago. They are also working out plans for offices in China and South America.

“New York will not be the last office that we open,” Manuel Aroyo said in a statement published on their website.

“We fervently believe that we need a greater presence in China and the Southern Cone of South America.

“Brazil is one of our strategic targets and we are sure that these new supports will be decisive for sustaining the Club’s position among the top three sports clubs in the world,” he added.

He played a big role in his country’s successful 2002 Korea/Japan World Cup, featuring alongside Ronaldo and Rivaldo -arguably the deadliest attackers the South American country ever had. 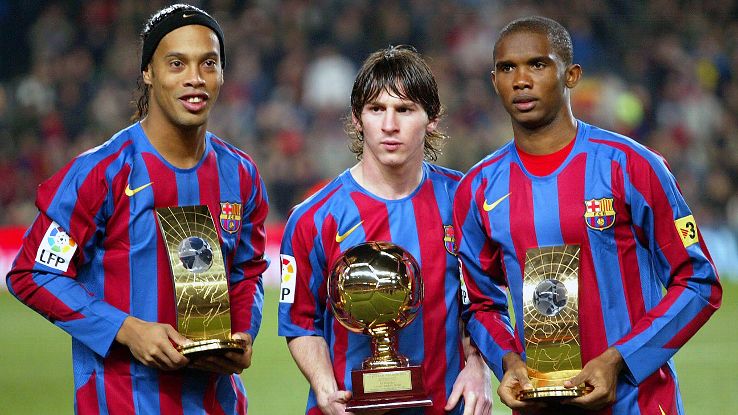 Lionel Messi perfectly described his former teammate as the bedrock of Barca’s rise in La Liga.

“Ronaldinho was responsible for the change in Barça. It was a bad time and the change that came about with his arrival was amazing,” the Argentina international footballer confessed.

The former AC Milan player explained further in a published letter he wrote to his 8-year-old self, saying: “…What you’ll be most proud of is helping to change football in Barcelona through your style of play.

“When you arrive, Real Madrid will be the power of Spanish football. By the time you leave, kids will be dreaming of playing ‘The Barcelona Way,'” he adds.

“Your role in this will be about much more than what you do on the pitch.

“You’ll hear about this kid on the youth team,” wrote one of the world’s most loved footballer.

Ronaldinho was rejected by Real Madrid in 2003 because he was “too ugly”.

The club signed England international footballer David Beckham for his charming looks but Gaucho proved them wrong at a point in his career.

One thought on “Ronaldinho returns to Barcelona for more”