Police said many people were stabbed during the horrific incident which reached its climax when a vehicle plowed into some unsuspecting road users.

Image shows one of the survivors at London Bridge, Borough market.

Although three of the jihadists who carried out the massacre were reported dead, more than 48 persons suffered varying injuries in the Saturday night incident.

Mark Rowley, [Metropolitan Police Assistant Commissioner], said in a statement that the attack is being considered as a “terrorist incident.”

This photo taken at 10:10 is a bit clearer. Apologies for taking it (considering the situation), but I did want the scene to be documented  twitter.com/Itc8N5a1gq 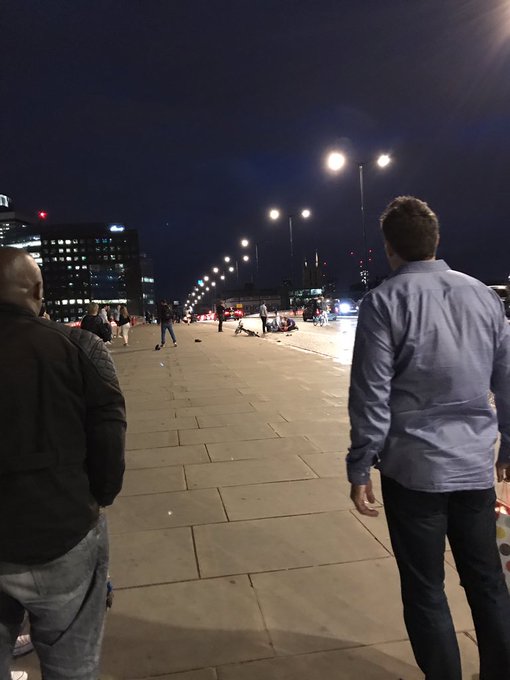 Rowley explained: “The vehicle continued to drive from London Bridge to Borough Market as the suspects alighted to carry out a series of stabbings.

“Armed officers confronted the three male suspects, who were shot and killed by authorities in Borough Market,” the officer said.

A reporter with BBC named Holly Jones, who was present during the attack, told the news outlet that many people were injured when a white van on London Bridge made an abrupt turn and hit pedestrians.

“A white van driver came speeding — probably about 50 mph — veered off the road into the crowds of people who were walking along the pavement,” she told BBC News.

“I’d say there are about four severely injured people. They all have paramedics assisting them at the moment.”

This is sad news for all grieving Londoners who are yet to recover from the shock of Manchester Arena’s recent bombing which authorities traced to a British-born 22-year-old Libyan named Salman Abedi.

British Transport Police confirmed in a statement that one of their officers who quickly responded to the emergency call was among the injured, but adds that his condition is not critical.

“I want to express my huge gratitude to the police and emergency services who are on the scene.” Prime Mininster Theresa May said. “Our thoughts are with those who are caught up in these dreadful events.”

Police are urging the public to stay off London Bridge and Borough Market.

The authorities also urged anyone with images or film of the incident to please, upload them at http://www.ukpoliceimageappeal.co.uk in order to help police carry out their duties.

“The United States stands ready to provide any assistance authorities in the United Kingdom may request,” wrote the U.S. State Department, “Our hearts are with the families and loved ones of the victims. We wish a full and quick recovery to those injured in the attacks.”