While a Millwall F.C. fan named Roy Larner was busy risking his life to save others during the recent terrorist attack at London Bridge, another beer snob — certainly with thought — gave his glass a priority.

The beer nuts has been identified as Paul Armstrong from Maghull in Merseyside.

Armstrong, apparently a brewhore, was caught in the line of fire during that horrific incident which ended seven lives and injured a total of 48 persons. But he knew what tragedy would fall upon him, if he had survived with nothing to gulp in gratitude.

He ran at a great pace, jumped, and galloped all the way to safety with his glass of beer glued to hand.

That’s the London spirit, isn’t it?

There’s an apparent terrorist attack in London and this guy is strolling down the street with his pint. 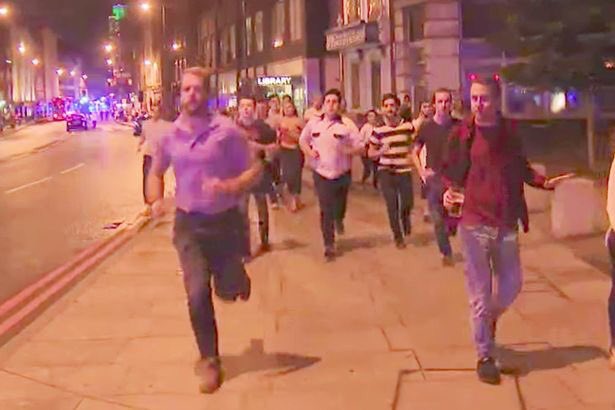 This man paid London prices for a pint. He was not going to let the #LondonAttacks stop him from enjoying it.

One of Armstrong’s relatives helped identify the “interesting” survivor after his picture circulated online.

Armstrong was having a good time when armed police officers stormed restaurants and bars in Borough market to evacuate stranded and terrified victims.

People were given orders to lie down before they were asked to run for their lives. But the beer geek wouldn’t let any terrorist ruin his night. He wasn’t afraid of dying with beer in hand.

The decision he made in a split second has been considered by many as “dark humor” which evokes laughter whichever way you choose to look at it.

A lot of people found it inspiring, too.

Howard Mannella shared the photo on Twitter with the caption: “People fleeing # London Bridge but the bloke on the right isn’t spilling a drop. God Bless the Brits!”

Another said: “Price of a drink in London… you better believe he ain’t spilling that sh**”.

Some critics have attacked Armstrong and “the people he inspired,” saying his action wasn’t funny for an incident which claimed many lives.

Someone responded in his defense of the beer Aficionado, “Our British humor helps us cope with tragedy – a contributing reason why I love my country.”

Why ISIS will never win. Attack just taken place but fella on right refuses to spill his pint.

@hmannella @Albilicueta true British style! This is what makes us great

People fleeing #LondonBridge but the bloke on the right isn’t spilling a drop. God Bless the Brits! pic.twitter.com/ceeaH0XxeX

Mourn and remember the victims, but don’t change.