Young Money’ Tyga is feeling ride or die once again as the world waits to celebrate 2Pac’s death come September 13. The California rapper showed some West Coast love to late music icon 2Pac on social media, revealing why he can’t get over his idol.

Tyga, 26, took to Instagram last weekend with a black and white picture of 2Pac.

A couple of weeks back, Kylie’s boyfriend posted a cryptic message of 2Pac and his DeathRow crew.

While Tyga’s love for the music icon has been questioned by many, it’s worth knowing that back in June, the Young Money rapper co-signed 2Pac’s upcoming biopic All Eyez On Me.

The picture below shows Tyga donning a Duke Blue Devils jersey, exactly the same as 2Pac. He went ahead to caption the photo with one word–“DAD”, trying to explain to anyone who may not have known why he’s so in love with Shakur.

The 26-year-old’s post drew attention from far and wide, with many asking questions on his relationship with the rap music pioneer. That was when the father-of-one dropped a heart-breaking story of his biological father.

“Pac taught me a lot more than my own father. Inspired me, Motivated Me, Listened without ever being there,” he wrote.

The rapper then went on to share that his father is now serving a life sentence in prison.

Sad as it is, Tyga showed a screenshot of one letter his father once wrote to him. According to Vibe, the prisoner told his son that “his time in prison has sent him on a spiritual journey”.

So many years have passed since the man and son, who’s now a father, parted ways. Reflecting on spending 25 years inside, Tyga’s father assures him that he has been on a search for him.

In his reply, Tyga wrote: “Things could’ve been different if you were around I’m sure. But I know life moves on and now I gotta teach my son to be a man. Even tho no one ever taught me how to be one.”

Pac taught me a lot more than my own father. Inspired me, Motivated Me, Listened without ever being there. 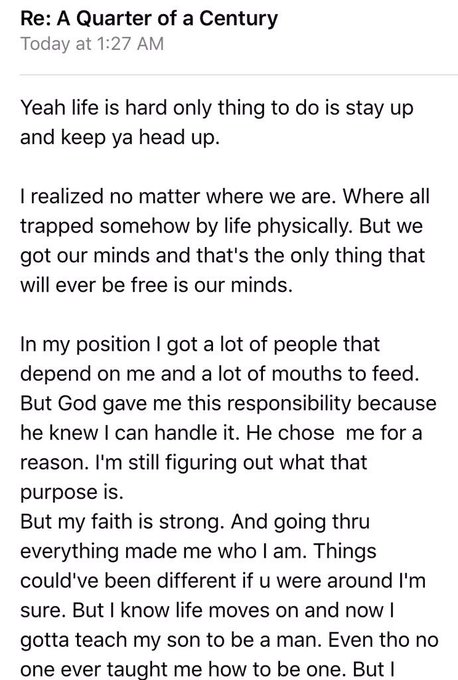 Never met my dad but this was my reply.

Life is Our Greatest Teacher