In dishonor of Philippines’ annual celebration of its Declaration of Independence which was proclaimed on 12 June, 1898, ISIS militants kept Rodrigo Duterte’s soldiers fighting to save lives as the country mourns.

While their fellow countrymen raised the nation’s flag amid tears and sorrow, the Independence Day celebration was marked by a tearful ceremony.

The national event was dedicated to all victims of the 3-week conflict which has ended over 270 militants and civilian lives.

Duterte’s soldiers-in-arms faced insurgency from Islamic militants who besieged Marawi city on 23 May and the fierce battle continued on Philippines’ Flag Day.

The embattled troops made efforts to drive all militants –dead or alive — from the southern city of Marawi in order to ensure that Philippines’ national flag was raised.

ISIS took over the city late last month and raised its black and white flags in “partial” victory.

However, thousands of embattled Philippine soldiers suffered a huge setback in retaking the city. The insurgents resorted to using over 2,000 civilian hostages as human shields.

The military prepared well ahead of the national day. Gunfire rang out and planes flew bombing raids to pummel districts of the largely abandoned city. While the onslaught continued, a crowd of soldiers and teary-eyed officials, firemen, police and clerks gathered outside a nearby government building to raise the Philippine flag, according to a report from the Associated Press. 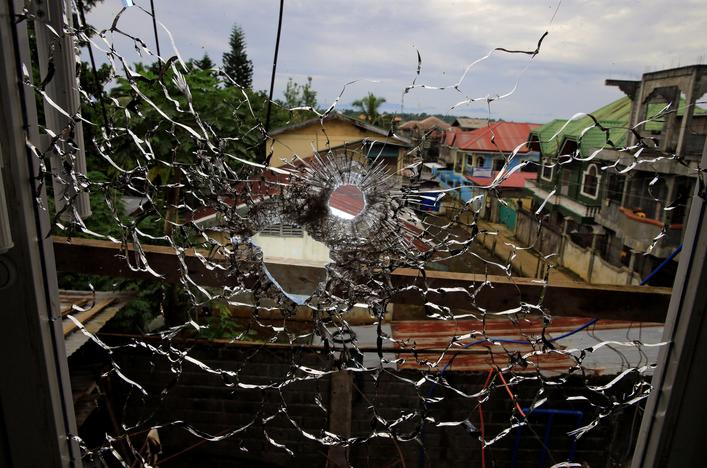 The annual celebration marks Philippine’s historical armed revolt against Spanish colonial rule.Independence was won from the US in 1946.

Following the bombings and losses recorded before 12 June, Duterte’s government has announced that all national flags will fly on half mast today in honor of the dead.

“This is dedicated to soldiers who offered their lives to implement our mission in Marawi city,” said Colonel Jose Maria Cuerpo, an army commander in Marawi.

Blasts from airstrikes were heard from a distance during the events.

A report from News Sentinel quotes a villager named Janisah Ampao as saying in a telephone interview, “I don’t know how we can re-start our lives after the fighting.

“Our city is in ruins, all the people have gone and the stores are closed. I saw on TV that our village has been destroyed.”

Ampao reportedly escaped the terror attack with her husband and two children but says hope was restored after she witnessed the national flag fly again at the provincial capital city.

Her family now lives at a nearby government building which serves as an emergency shelter for all evacuees in the area.

A total of 13 Philippine marines lost their lives last Friday in a street-to-street war.

Media reports confirm that 58 soldiers and police, including 20 civilians, have died in the terror war. Nonetheless, over 200 militants have also gone to the world beyond as the survivors continue in this battle for supremacy.

An ISIS propaganda video which was released by Amaq on Monday showed a group of jihadists shooting 6 Christians in Marawi. The voiceover sparked speculations that more executions had actually taken place off-camera, according to a US-based SITE monitoring service.

President Rodrigo Duterte has said the militant attack was part of a wider plot by IS to establish a base in the southern region of Mindanao, and has declared martial law there to quell the threat.

Marawi’s military chief, Lieutenant-General Carlito Galvez, said at a news conference on Monday that “the fight would be most difficult, deadly, bloody, and will take days and months to clear up.”

President Duterte isn’t in the mood to celebrate his country’s historical day. He canceled a diplomatic reception to mark the Independence Day at his presidential villa.

“He doesn’t feel like giving a toast, even symbolic, when soldiers are dying and the evacuees and the displaced are in the provinces and in Marawi’s margins,” said Foreign Secretary Alan Peter Cayetano at a press briefing.

Duterte is facing the worst crisis of his yearlong presidency.

Philippine military officials confirmed the fight in Marawi started after the government’s failed efforts to capture Isnilon Hapilon on May 23. He is said to be an ISIS leader stationed in Southeast Asia.

Many Christians were killed in the terror which followed as a reprisal attack in the city. About 500 gunmen waving Islamic State group-style black flags were believed to have carried out the massacre.

US forces are helping Philippines in the fight against terror.

One thought on “Philippines Independence Day rocked by bomb blasts”