Xavi has argued that it was none other than Pep Guardiola who made Barcelona what they are now, adding that even rivals Real Madrid was forced to change their style of play because of the infectuous coach. 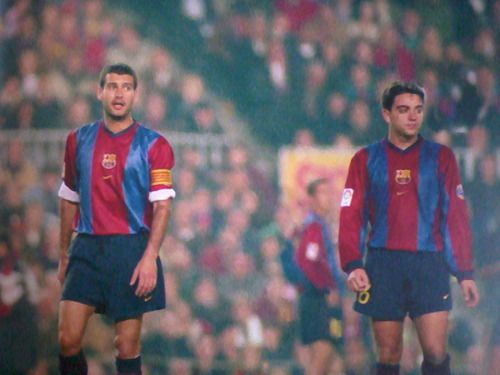 Image shows former coach Pep Guardiola and Xavi Hernandez played together as teammates at Barcelona a long time ago.

The former Barcelona player spoke with Sky Sports in a documentary about Guardiola that was aired Monday night.

According to Xavi, the new Manchester City boss began a “real football revolution” at Barca. His presence in La Liga was by all, especially arch-rivals and there’s no denying the fact that Pep’s stay at the club will forever be remembered.

“Joan Vila, who was my mentor at La Masia, told me, ‘boy, soak up everything you can from Pep … his first touch, how he turns his head before receiving the ball, when he is under pressure, when he has space, his changes of rhythm, how he uses both feet to control the ball’,” he said.

“The first thing I remember him saying as a Coach was that he would not tolerate any player not working hard.

“’This is the only thing that I require, that you work hard for the group [what Pep said].’ This was a surprise for us.

“The high pressing was brilliant. It was a real football revolution, a modern kind of football.

“Within a few years, no one played long balls anymore, even Real Madrid changed their style.

“Pep’s first year started this football revolution. We made history. Not just for the victories, but also for the way we played.

“I think he is one of the few people who can change English football.”