Pamela Anderson first gained fame in the pages of Playboy and rose to international fame with her role on Baywatch. She garnered more fame in 2010, when she competed on Dancing with the Stars.

Having Brandon and Dylan is a divine blessing and a wish that came through for the two lovebirds – Tommy and Pamela.

Though the marriage crashed shortly afterwards, Pamela will forever treasure the fruits of the union.
She said, “My kids are grateful to be born out of love. Everything else I was trying to piece together”.

Pamela Anderson and her ex-husband Tommy Lee got married in 1995 and the marriage lasted only 3 years. The couple divorced in 1998.

Till this day, both Tommy and Pamela are still close friends.

“We’re good friends, we’re getting better at co-parenting our kids,” Pamela Anderson confessed. “He’s such a supporter of mine and I’m really happy we’re on such great terms.”

“There’s a connection there that will always be.”

Anderson told PEOPLE 17 years after the bitter divorce that Lee was her true love.

In her words, “There was Tommy and then there was nobody else. He was the love of my life. We had a wild and crazy beginnings that was too much for both of us.

“It really was love at first sight. I only knew him four days before I married him”.

Pamela Anderson is a vegan and animal rights activist. The natural-born brunette had her huge breast implants removed on 15 April, 1999 confessed to New York Post, “I don’t now if I’d recommend surgery – Women’s bodies are beautiful – I’ve had a love/hate relationship with my breasts my whole life.” 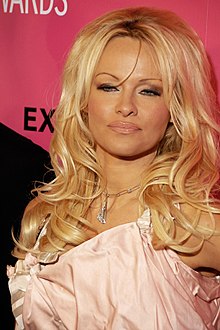 Voted as the most powerful female Canadian in Hollywood by a Canadian economic magazine in 2005, Pamela has appeared a record 14 times on the cover of Playboy.

2 thoughts on “Pamela Anderson And Sons.”