Just few days ago Hulk Hogan was awarded a huge 115million dollars as compensation in the Gawker trials and many thought that was a lot but he didn’t quite agree, he broke down in tears because the sex tape verdict ‘wasn’t strong enough.’

Hulk Hogan hasn’t been a happy man 115million dollars victory, a situation which he confirmed to ET.  The 62-year-old former WWE Champion whose real name is Terry Gene Bollea said the cash award sanctioned by the jury last Friday wasn’t just enough. The case was filed 3 years ago. 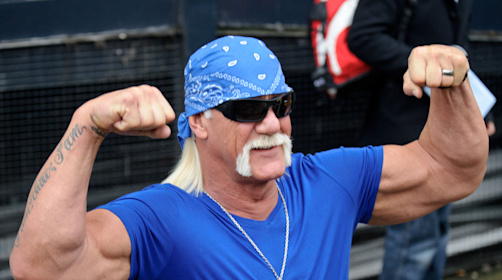 Referring to legal instructions given to Gawker to remove the video which was ignored, Hulk said:

“I thought it was, but now I’m starting to think that if Gawker is going to continue with this type of behavior, the verdict wasn’t strong enough, because they’re continuing on.”

“They even told the judge, ‘We get it, please, no, stop, we understand,’ but, that was a lie because they’re still out there doing it as of today.”

“It’s just smoke and mirrors with them,” he continues. “For us, it’s never been what [Gawker Media founder] Nick Denton claims this trial is about. It’s not about the First Amendment, it’s about privacy.”

Hulk Hogan sees the sex tape case as the most difficult thing he ever had to face in his entire life. Everyone can see how depressed he has been through the week.  He confirmed that breaking the news to his wife Jennifer and 2 kids – Brooke, 27, and Nick, 25, – caused him so much pain. He still cries each time he recalls that moment.

“I had to explain it to [Brooke] and she said, ‘Dad, I love you. You made a huge mistake, but do what’s right,'” he recalls. “And then Nick was really cool. So once I got those three people behind me, the rest was doing what was right.”

Doing the right thing means opening up a legal case though he knew his world would be shaken by that action. His family was shaken by the revelation but they stood together in pain and victory.

He  continued, “Everybody deserves a second chance in life, and there’s something about telling the truth. You can actually wake up and look at yourself in the mirror, and if I didn’t do things this way, I don’t know what would’ve happened to me.”

“I’ve had some low spots before in my life, but this would’ve been the end all be all for me if I hadn’t followed this through, because it was never about the money to me. It was about doing what’s right, and making sure that what happened to me didn’t happen to someone else who might not have the kids, the family, and the constitution to fight.”

Jurors in the Hulk Hogan sex tape case ignored a plea for mercy Monday and added another $25 million to the $115 million they already awarded ex-wrestler Hulk Hogan.

The jury deliberated nearly four hours before deciding on the punitive part of the case.

Outside the courthouse in St. Petersburg, Florida, Hogan and his attorney David Houston hailed the jury’s decision.

“I feel great. I’m really happy about everything that’s happened,” Hogan said. “I think we made history today because I think we protected a lot of people from maybe going through what I went through. So we’re very excited, very happy.”

When asked if he expected such a steep monetary judgment, Hogan said he “didn’t know what to expect.”

“It was only the right thing to do, folks,” Houston chimed in. “Of course we did.”