Gareth Bale was for the first time, selected to represent Wales at the end of the 2005–06 season for a friendly against Trinidad and Tobago on 27 May 2006. The match was played in Graz, Austria.

Bale came in as a second half substitute for David Vaughan after 55 minutes. With a wonderful pass, he assisted Robert Earnshaw’s winning goal in a match that ended 2–1.

At 16 years and 315 days, Bale became the youngest player to play for Wales. This achievement saw him break a previous record held by Lewin Nyatanga for the last three months; this record, too, was itself superseded by Harry Wilson in November 2012.

The Welshman has grown in leaps and bounds pursuing his career away from England. Brian Flynn commented that Bale was potentially a future star of the game, comparing his technical ability to that of Ryan Giggs.

On 7 October 2006, Bale became the youngest player ever to score a goal for the full Welsh national team in the Euro 2008 qualification match against Slovakia. It was awesome to see him score with a free kick.

Bale was eligible to play for England through his grandmother, but he stated in 2007 that:

“It is an honour to play for Wales…Nobody ever got in touch with me personally from England, only through my agent.”

Feeling neglected by England in his growing years, one can better understand why Bale seem to have no high regard for The Three Lions.

He began his professional career at Southampton, playing at left-back and earning acclaim as a free kick specialist.

Bale moved to Tottenham Hotspur in 2007, for an eventual £7 million fee. During his time at Tottenham, managerial and tactical shifts saw him transform into a more attacking player.

From the 2009–10 season, under the guidance of Harry Redknapp, Bale became an integral part of the team, rising to international attention during the 2010–11 UEFA Champions League.

On 1 September 2013, Bale was transferred to Real Madrid for an undisclosed fee. Press at the time reported the transfer value at figures between €91million and €100million.

In January 2016, documents pertaining to the transfer were leaked which confirmed a world record transfer fee of €100.8 million, eclipsing the previous record fee of £80 million (€94 million) for Cristiano Ronaldo in 2009.

Bale played an integral role in his first season at Real Madrid, helping the club to win the Copa del Rey and the UEFA Champions League, scoring in both finals. The following season he won the UEFA Super Cup and scored in a third major final to help the club win the FIFA Club World Cup.

In 2016, ESPN ranked Bale twelfth on its list of the world’s most famous athletes.

Bale was assigned the number 11 shirt at Madrid. The same number he wears for Wales and formerly for Tottenham. 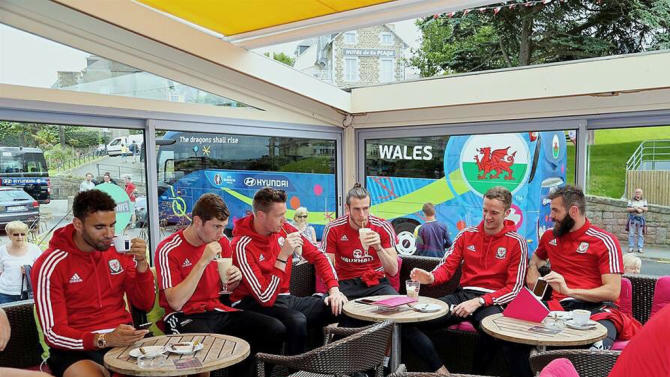 Image shows Gareth Bale and countrymen chilling out in France as Euro 2016 heats up. Tonight is the night that’ll separate boys from men–Portugal or Wales.

Gareth Bale says he’s fighting for national pride, what do you think of Cristiano Ronaldo?

One thought on “Gareth Bale: The Making Of A Hero.”