In an embarrassing mistake from the White House, Chinese president Xi Jinping was referred to President of Taiwan, and it’s not just funny for his compatriots.

This diplomatic mistake was committed by US President Donald J. Trump at the G20 Summit.

Mr. Trump’s official statement which was released last weekend in Hamburg, Germany, through the Office of Press Secretary Sean Spicer, named Xi as “President Xi of the Republic of China.”

The erroneous transcript didn’t contain much mistakes as critics portrayed because in fact, Xi remains the one and only President of the People’s Republic of China.

However, it got more interesting considering the fact that the government of Taiwan calls itself “the Republic of China.”

Some social media users who quickly spotted the difference, paid less attention to whether Spencer’s transcript was prepared to indirectly taunt China’s firm stand on Taiwan.

Trump hasn’t been a staunch supporter of Xi’s One-China policy, and political analysts believe it’ll be a bargaining chip in the two countries’ cat-and-mouse relationship.

The White House later released an online version which referred to the 64-year-old party leader as “President Xi of China.”

Xi’s real title is president of the People’s Republic of China, the one-party Communist state set up after Mao Zedong’s victory in the Chinese civil war in 1949. Mao’s vanquished opponents fled to Taiwan and maintained the claim over all of China, referring to themselves as the Republic of China and keeping a United Nations seat under that name until 1971. China considers the island a province and has made recognition of the policy the foundation for diplomatic ties with the US and other countries.

Mistakes are human, aren’t they? It provides us with opportunities for learning and growth.

In the course of his leadership, Xi has taken more critical approach on North Korea, and making great efforts to improve relationship with South Korea.

However, the American government is demanding a more assertive stance against Kim Jong Un’s dictatorship for the sake of global peace. 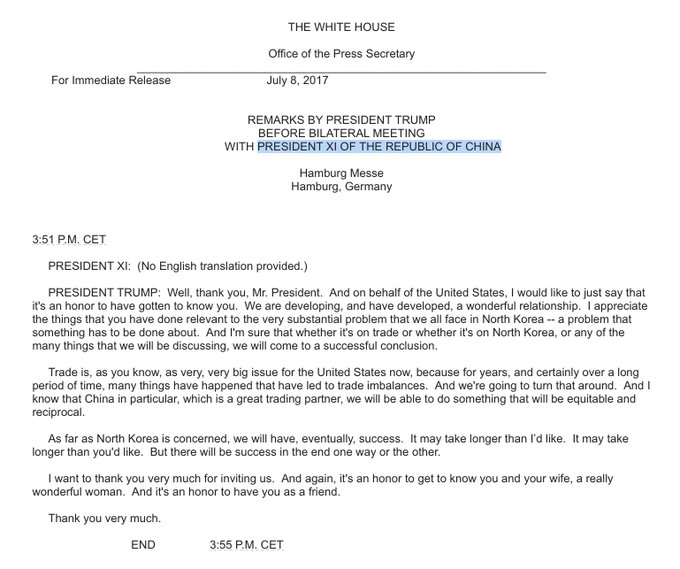 The Republic of China is Taiwan.

Xi married Ke Lingling, the daughter of Ke Hua, an ambassador to Britain in the early 1980s. They divorced within a few years before he married his current wife, a prominent Chinese folk singer named Peng Liyuan, in 1987.