The 29-year-old currently has custody of their only daughter Dream Renée, and her lawyer confirmed today that a temporary restraining order has been filed.

Lisa Bloom, an attorney for the mother-of-two, said in a statement on Friday that the action became necessary after Rob posted nude pictures of her during their recent social media rants.

Bloom said she and her client will visit Los Angeles Superior Court on Monday to secure signing and release of the appropriate restraining orders.

The “offended” husband claimed infidelity was his reason for posting leaked nude pictures of his woman on social media. He tweeted a series of unguarded rants, and was forced to switch over to Twitter after his Instagram account was blocked.

Walter Mosley, a legal practitioner who works as a co-counsel with Bloom, said then that they were ‘considering all legal options and recourses’ for the defaming tweets.

“Cyberbullying your ex is harassment.

“Chyna and I both believe that this is an important women’s rights issue, as too many women and girls have been slut-shamed by exes.

“It stops now. Your attempts to shame and control her are hereby rejected. Her body, her choice. Her life, her choice. Back off.”

I represent Blac Chyna. I just gave Rob Kardashian notice that we’ll be in court Monday seeking restraining orders against him. More to come

Here is my statement on why I am representing Blac Chyna in this important fight in women’s rights. 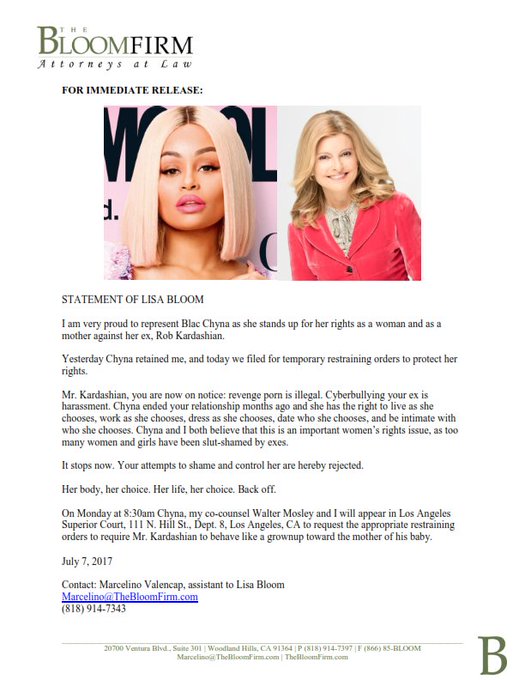 Blac Chyna dated Tyga between 2011 to 2014, and has a child for the rapper. She’s popularly known as a “video vixen” for her frequent appearances in hip-hop music videos. The former stripper owns a make-up brand Lashed by Blac Chyna, with a beauty salon in Encino, Los Angeles.