Real Madrid henchman Cristiano Ronaldo is an achiever, a workaholic, a ladies’ man, and now EA Sports favorite for FIFA 18’s global cover which is set to be unveiled on 29 September, 2017.

As Ronaldo expects his fifth Ballon d’Or trophy to match arch-rival Lionel Messi’s records, the famous No. 7 now understands why they say “there’s a woman behind every successful man’s story.”

C. Ronaldo has landed one of his first major football contracts for the year 2017, in addition to his list of trophies. For the first time in his career, he has been named the face of the world’s most popular football game.

The battle for supremacy between Ronaldo and Messi continues, and is getting wider every week.

Neymar and Messi have been Konami favorites. Meanwhile, the Argentine who was on the cover of FIFA 16, has reportedly signed a new contract with Pro Evolution Soccer.

Aaron McHardy, a senior producer of FIFA, said: “The world’s best player has helped fuel the biggest leap forward on the pitch that we’ve ever delivered.

“We are extremely excited to partner with Cristiano – working with him we learned a lot about his unique play style and what makes him so special. His passion, energy and global fanbase make him the perfect ambassador for FIFA 18.”

EA Sports recently confirmed that Ronaldo was at their studio in Madrid for some motion-capture images which enabled them create the desired in-game likeness. And the former Manchester United winger didn’t hesitate to express his excitement in a Twitter post.

He wrote, “It’s My Time.” Believe it or not, there’s nothing more to explain. He’s the best.

“It is a real pleasure to be on the cover of FIFA 18,” Ronaldo added. “It’s a great feeling and I am grateful to have been chosen.”

To say that his new girlfriend Georgina Rodriguez is the ying to his yang, would be an outright understatement.

CR7 and Georgina are a match made in heaven. She is more than life to him; his inspiration for the historical La Liga and UEFA Champions League double.

The 24-year-old is one reason Ronaldo, 32, is winning at life. And we can’t help but gush about her magic touches which radiates through the Portuguese international footballer on or off the pitch. Every Madrista knows.

Miracles happen when she smiles, and she knows exactly how to make his impossibilities become reality.

Despite the fact that CR7 is a born winner, his recent transformation isn’t a thing of chance. It’s no longer a secret, anyway, not after his awesome performance against Juventus at Wales National Stadium on 3 June. 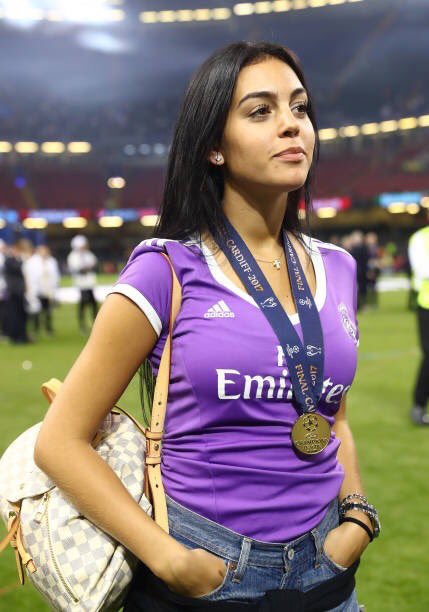 Ronaldo was named ‘Man of the Match’ after he scored a brace in the CL game which ended 4-1 in favor of Los Blancos.

The achievement was his fourth trophy at the competitions — once with Manchester United (07-08 season) and thrice since he joined Madrid.

Georgina Rodriguez earned her UEFA Champions League medal, having been the innermost fire in Madrid’s heart of hearts. There are speculations that she may be pregnant for the Portuguese footballer.

She’s on 23, young, charming and sexy. Exactly what he needs to survive a few years more at Santiago Bernabeu.

Here are some more facts you need to know about the lovebirds:

Ronaldo met her at a Dolce & Gabbana party in Madrid.

They’ve traveled to Disneyland in Paris, and attended Justin Bieber’s concert together.

The Real Madrid forward dated Russian model Irina Shayk for nearly five years until January 2015, and her departure created a vacuum in Ronaldo’s heart. The club suffered for the painful loss, too — something her sister described as “comparable to real death” at that time.