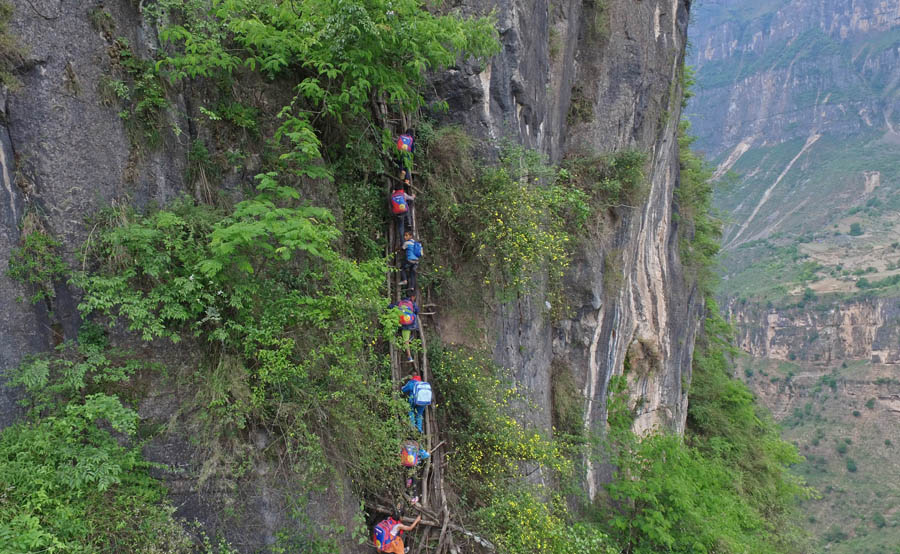 Children climb up a cliff on a vine ladder to an isolated village on the top of a mountain in Liangshan Yi autonomous prefecture, Southwest China's Sichuan province, on May 14, 2016. Atule'er village, home to 72 families, is known as "cliff village" because its vertical distance to the ground is 800 meters. The routes leading to the outside world are 17 vine ladders.

A bird’s-eye view of kids climbing cliff. It takes a young and agile villager about one and a half hours to climb up the mountain, and even longer for kids.

When the whether is bad, no one goes out of the village.

The village sits on the slope of the mountain.

According to Apitiji, there was a cable-way connecting the village and the outside world. But due to its high cost of usage, it had been barely used before being removed.

A villager said as a metal ladder costs millions it has never been built.

The village sits on the slope of a mountain with an elevation of 1,400 meters. Village Party chief Apijiti said as far as he knows, seven or eight people have died climbing the cliff.

A villager stands on a rock to receive signal for his mobile phone.

According to Apitiji, the village used to be a peaceful and rich place thanks to its fertile land and the isolation which prevented it from war and bandits. But now it lags the outside world because of poor transportation and most villagers live in poverty.

Children who do not go to school out of security concerns or poverty play at the village, May 14, 2016.

Without road, peppers and walnuts the locals plant and livestock they raise cannot be transported out of the village.

Few girls from the outside want to marry young men in the village, and the bride price for girls in the village is lower than those from other places.

Children climb a vine ladder on their way home, May 14, 2016. The children study at a school at the foot of the hill and go home twice a month.

Children rest on the vine ladder.

What do you think about this information? Comments are welcome.

1 Comment on You Will Never Wish You Were Born Here.

One and the same thing can at the same time be good, bad, and indifferent, e.g., music is good to the melancholy, bad to those who mourn, and neither good nor bad to the deaf.