News reports earlier yesterday said two men were murdered in Dhaka, Bangladesh, now the U.S. State Department has confirmed that one of the victims was a U.S. embassy worker. Local reports say the men were hacked to death. 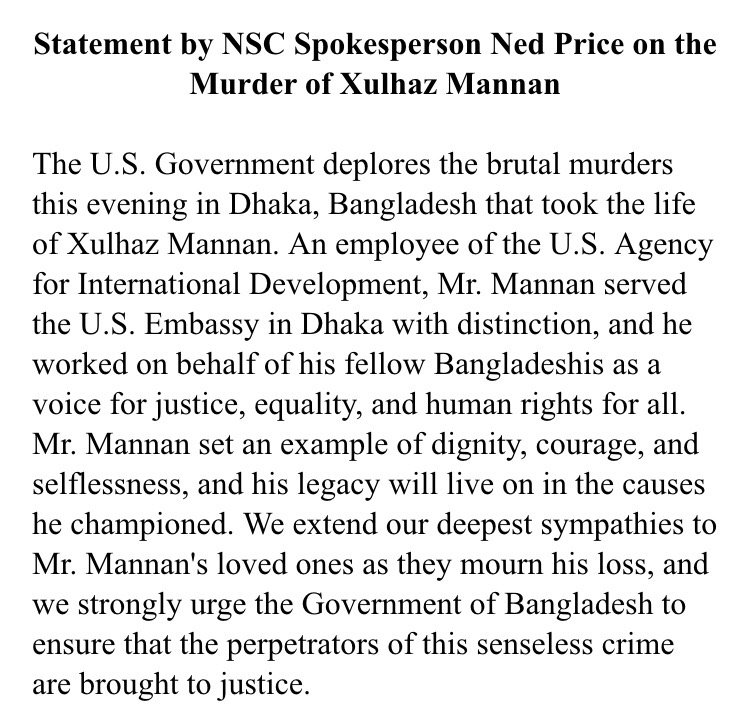 A State Department spokesman John Kirby told reporters at a briefing today that the employee, Xulhaz Mannan, was known as a “courageous advocate for LGBT rights.”

“He was murdered in his home alongside a fellow activist”, Kirby said.

“An act like this simply is beyond words, unjustifiable, inexcusable and our heartfelt condolences of course go out to his mother, to his family, to his friends, and to his colleagues, as well as all of those who knew and loved the other individual who was also brutally murdered with him.”

Kirby informed today that: “As we mourn his death we celebrate Xulhaz’s life and everything he contributed to Bangladesh, to the United States and to the global struggle for human rights and dignity. And we pledge our support to Bangladeshi authorities to ensure that the cowards who did this are held accountable.”

Bangladesh is generally a moderate country with a diverse culture, though since February last year some suspected militants have killed secular or atheist writers and those in religious minority groups.

Ambassador Marcia Stephens Bloom Bernicat posted on Facebook: “Xulhaz was more than a colleague to those of us fortunate to work with him at the U.S. Embassy.”

The embassy said it was a “brutal murder” that took the life of Mannan and another person, whom Amnesty International identified as Tanay Mojumdar.

“We abhor this senseless act of violence and urge the Government of Bangladesh in the strongest terms to apprehend the criminals behind these murders,” Bernicat wrote.