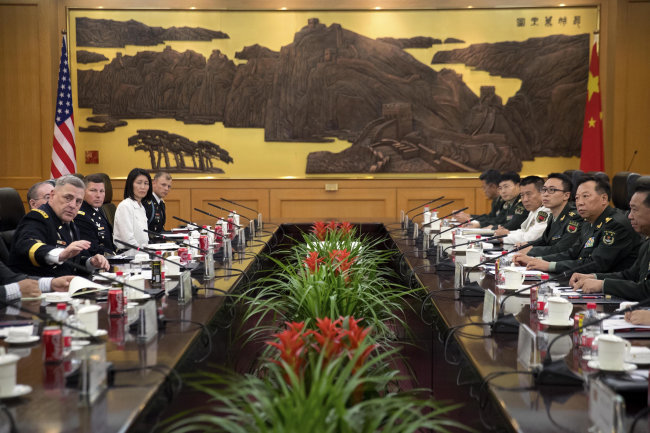 The U. S. and Chinese military officials holding talks in China.

A leading Chinese military figure is calling for stronger military-to-military cooperation with the United States of America in order to manage potential risks.

General Li Zuocheng, head of the Chinese Army, made the suggestion while meeting with U. S. Army Chief–General Mark Milley, in Beijing.

Li Zuocheng says strong military ties between the two sides should be seen as a mark of mutual respect, and can help avoid unnecessary confrontations.

But at the same time, he also says the U. S. side is threatening the “cordial” relationship through the deployment of their THAAD Missile System in South Korea, not forgetting America’s meddling actions in the South China Sea.

Gen. Mark A. Milley met with his Chinese counterpart, Gen. Li Zuocheng, and other senior People’s Liberation Army leaders amid strong Chinese protests over the decision to base the U.S. Terminal High Altitude Area Defense (THAAD) system south of Seoul.

However, the U.S. Army’s Chief of Staff told Chinese officials at a meeting on Tuesday that there’s no need to feel threatened by South Korea’s decision to deploy a powerful U.S. missile defense system.

For his part, Milley is also suggesting more military exchanges might help soften tensions, re-affirming the American position that the defense system is intended to destroy possible North Korean missiles and not to track missiles inside China.

Milley made it clear in an official statement that THAAD is not and will not be a threat to China.

Chinese state media have published daily attacks against the U.S. and South Korea over the missile defense system, and China has canceled events involving South Korean entertainers. China also appears to be withholding support at the United Nations for condemnations of North Korea’s missile programs.