Just as the argument continues on who's the better player between Maradona and Pele; football fans, analysts and even coaches will never reach a unanimous agreement on Cristiano Ronaldo and Messi. Good for the egos and good for football in general. 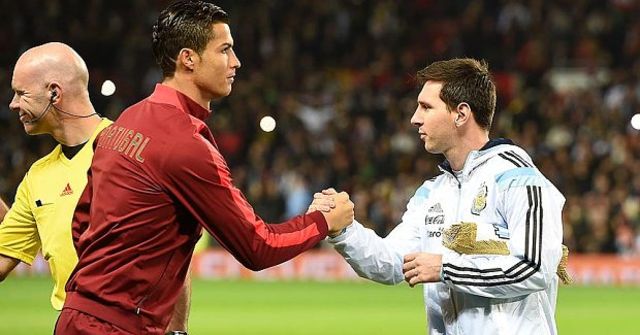 Image: Cristiano Ronaldo and Lionel Messi greets before a match.

Sir Alex Ferguson, the former Manchester United Manager has revealed what he believes is the major difference between  the two - Lionel Messi and Cristiano Ronaldo. Both players in the debate have stood out from the crowd in their performances over the years. They have won awards on different stages and achieved even more with their clubs – Real Madrid and Barcelona – than any other player who graced the turfs before them.

Lionel Messi and Cristiano Ronaldo surely deserve the attention they get.

Whatever sides one chose to fall on wouldn’t change the fact that both men will live on long after they quit football. As we all have different opinions, so does Sir Alex Ferguson.

Before CR7 completed a transfer to Real Madrid in 2009 for a world-record fee, the footballer worked with the Sir Alex Ferguson who was Manchester United’s coach.

The retired coach has nothing but praises for the Portuguese star. Cristiano Ronaldo’s outstanding work ethic during his career has gained recognition from the iconic Scottish coach. It was this man, Sir Alex Ferguson who molded CR7 into whatever weapon he has become over the years.

Ronaldo has enjoyed another wonderful season with Real Madrid in La Liga.

Once again the forward has passed the 50 goal mark in all competitions, something he has now achieved in the last six campaigns.

Speaking at the Dublin Convention Centre on Tuesday, as reported by the media, Sir Alex said: “It’s interesting to me that we hear so much about two players these days: Ronaldo and Messi,.

“Now don’t get me wrong, Messi is a fantastic player, it’s like he’s wearing slippers when he controls the ball. But here, for me, is the difference. Messi is a Barcelona player.

“But Ronaldo could play for Stockport County and score a hat-trick. He has everything. He can shoot with both feet, head the ball, he’s as brave as a lion, and here’s something else people overlook.

“During my time at Manchester United I was lucky enough to have a lot of people who put in countless extra hours to get better. Gary Neville turned himself from an average footballer into a wonderful one because of his work ethic, as did David Beckham.

“But Ronaldo used to completely exhaust himself, and still does. He just wanted to be the best in the world.”

1 Comment on Sir Alex Ferguson Differentiates Between Ronaldo And Messi.

My first ever sex scene in a movie was in 'Superbad.' Because I was 17, for legal reasons my mother had to be on the set. It was real awkward, but it worked out OK because when I watched the movie with her, the sex scene wasn't awkward because she'd been