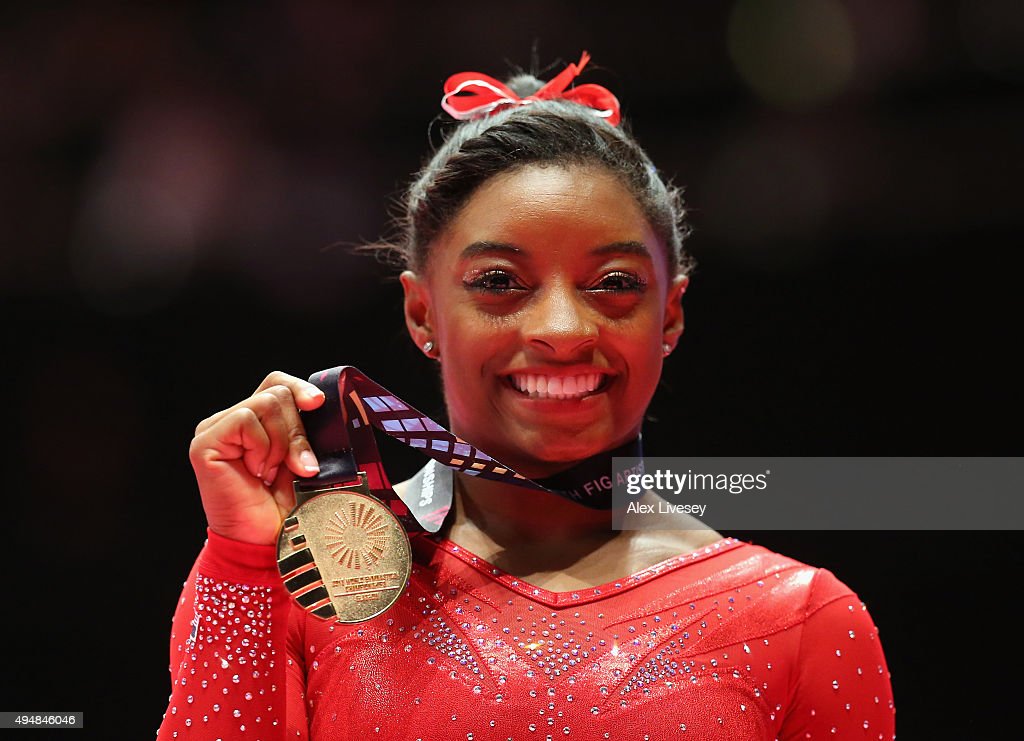 Simone Biles won the individual all-around Olympic gold medal Thursday, and she’s without doubts, the best gymnast in the world.

“Everybody already knew that, but now it’s official. And now, she’ll spend the rest of the Rio Games collecting more golds in the individual event finals while the debate will start about whether she’s the best ever”, Greg Couch [a writer for BR] wrote.

Everyone agrees it’s very hard to set records, and even harder to break them. But when a gymnast breaks one too many records from different levels, it starts feeling like pure madness. That’s exactly how Simone Biles is making us feel.

The question is, what does that really mean?

“She isn’t a swimmer, where the idea is to do what everyone else has done, only faster. Or a runner, who is the best ever because she cut .01 off the 100-meter dash. Biles isn’t just doing what Mary Lou Retton, Nadia Comaneci, Nastia Liukin or even Gabby Douglas did,” Greg said .

The sports writer agreed it’s true that a lot of people possess exactly those qualities that sets Biles apart–like true greatness, true evolution and revolution in a sport like this that requires only the imagination to do it.

Her greatness starts at the point where she can see her body doing things that no one has done before. In essence, her body takes control of her, and she simply goes along with flow. How amazing that is.

“It’s nerve-wracking,” the legendary gymnast explained before the Olympic Games.

“But you have to be confident, too, because if you train well, you should be OK. Sometimes, it just comes down to being a crazy day sometimes.”

“There is a move on the floor exercise that is now called the Biles,” the reporter in Rio revealed. Then he tried to mimic the moves.

“Without getting too technical—because I can’t—the move is this: On a pass from one corner of the mat to the other, she launches into a double back-layout—flipping in midair twice, with her body straight—and then throws in something others don’t do: a half-twist.”

Lol, you dare not immitate a gymnast if you’re not one.

Greg continued: “On her dismount on the beam she does a double backflip and has, in practice, done two full twists. She said that during her bars routine, she is toying with a move that gets her into a handstand—as others do—and then doing a full pirouette instead of a half. She called it a Weiler full instead of a Weiler half.”

The 19-year-old gymnast admits she knows how strange it is that she’s doing all that. As earlier said, she doesn’t understand how her body takes control of the moment but she just flows with the rythm.

Sounds like a fairy tale, right? Biles wants us to believe gymnastics is as simple, no, as mysetrious as she puts it. End of story. I’d rather watch on TV.

In her words: “Nobody has done that. Sometimes I do it accidentally.”

Even CNN has been forced to agree that Biles is doing the impossible at Rio Olympics: “There are some athletes which struggle to live up to the hype — but in Rio it was the hype which failed to keep up with Simone Biles.

“The US star showed just why she’s the talk of town with another sublime showing to win gold in the women’s all-around final Thursday.”

Biles took gold ahead of US teammate Aly Raisman and Russia’s Aliya Mustafina after finishing off with a dazzling floor routine.

“These girls and young women, under the regimen of U.S. team leader Martha Karolyi, are training 32 hours a week.
“You can debate whether that is too much work for a kid’s body, or whether all that pounding is wreaking havoc on children’s growth plates. Biles is 4’8″ of large, solid muscle,” Greg revealed.
Aly Raisman has been an honest competitor and must receive recommendations for that.

She did not only win the silver medal in the women’s gymnastics all-around, but scored headlines with her comments on Biles after their victory.

“I knew Simone was going to win,” Raisman said.

“I was just hoping I would be able to get second. So it’s very, very special.”

“I think everyone knew she was gonna win a couple years ago,” Raisman said, laughing.

“We all knew. She’s won every single meet for the last four years.”

Biles is the best, every opponent that came her way has been wise to avoid getting crushed. What would you do if you were Raisman’s mom? Smack her butts for not daring to challenge the best? Nay and never. It takes heart and more to do so.

“I could not be more proud to represent my country at the 2016 Olympic Games. My time in Rio has been incredible, and I’ve had a great time down here cheering on my Team USA and Team Kellogg’s teammates.”

Somebody asked Raisman if this must be how swimmers feel when they face Katie Ledecky.

Though these athletes, especially gymnasts make it look as if what they do is injury-free, it’s in fact, suicidal.

Truth remains, whatever dangers there are, gymnastics as a game, transforms an athlete into a level of subconsciousness — making them think the body will do whatever it’s required to do. That’s beyond power and control.

And doing things no one has done before means having a somewhat supernatural ability.

Imagine when you’re doing flips on a four-inch wide beam, risking serious injury or even death that could happen in just a split second.

“But there are days I decide I’m feeling it today. It just depends how you’re feeling. When I was younger, I was a little more fearless.”

Biles told Bleacher Report that on one move, she showed it to Martha and said she wanted to do it. Karolyi said she “didn’t think it was a good idea”.

“But I landed it so many times,” Biles said, “she couldn’t say no.”

Meanwhile, while the next generation and her competitors are trying to catch her moves, Biles said she’ll never stop dreaming.

In other words, “catch her if you can” but you have to do that “in your dreams,” I say.

Biles perfectly summarized it: “There’s a lot more moves to try.” So now you know it’ll be a long way home.

She is also the most decorated American female gymnast in World Championships history, with a total of fourteen medals, ten of them gold.

Simone Biles was a member of the 2016 U.S. Olympic team dubbed the “Final Five” who took gold in Rio de Janeiro.