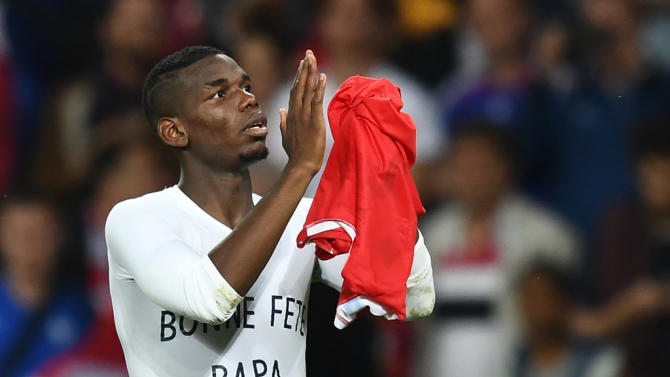 In the past week, Kroos’ brother Felix who is also a footballer had claimed that the midfielder was worth €120m plus Pogba – as opposed to reports which said the contrary.

Raiola who was quoted as being responsible for the provoking thought, isn’t ready for a messy argument. He has sarcastically agreed that Madrid should cash in on the German if such an offer came calling.

“We’re very calm. I talk a lot with him, but we’ve had a very clear idea since last summer. Four teams reached an agreement with Juventus, but Paul wouldn’t leave any because he was very clear on which technical path to follow, and that’s much more important than money.

“He wants a project that he feels good in, with a brand of football that he likes and people who have faith in him. He likes his team to have clear ideas, a project, and some big clubs don’t have them.

“He’d have no problem staying at Juve. He’s very happy with Juve and Juve are very happy with him. We’re talking to two or three teams and Paul likes some of them a lot because of their sporting project, but he wants tranquility during the Euros.

“It’s no secret [that Madrid are one of the clubs]. Every year I meet with Madrid, but also with [Manchester] United, Barcelona, [Manchester] City, Liverpool, Chelsea … it’s my job.

“In the last two years, my relationship with Real Madrid has been clear and professional. It never existed before. Now there’s serious dialogue, which is a good thing. They know my character and how I am. I also understand the needs of Madrid.

“There’s absolutely no [problems dealing with Madrid]. We’re talking without any problems. I have a good relationship with Jose Angel Sanchez, who is the CEO. We know what he wants, but nothing has been decided.

“We’re only talking. [Zinedine] Zidane’s will is important, plus the will of the club. We’re in the initial phase and not negotiating [a transfer] yet.

“The two parties know what they want and we’ll see if in the end we can close a deal, or whether it ends in a divorce. The atmosphere is very positive.

“[On who else is interested in Pogba], sheikhs, everyone. He’s an extraordinary talent. There’s no-one like him in the market, although [Toni] Kroos’ brother says he is worth €120m…

“[Pogba] is worth what the market offers. If I were Real Madrid, I’d sell [Kroos] and buy a new team, really. I’m not the person who decides the value of a player. His value is decided by whoever buys him.

“Juve don’t want to sell. They’re a gentleman’s club and always have been. When we extended his contract, we agreed that if there was another project that Pogba liked and could make him a better player, Juve would have to negotiate within reason.

“It’s to go to a project where he can be the best and win every trophy. It’s logical and right that he’ll decide where he goes.

“I ask [Pogba] to be happy. Happiness is the most important thing. I’m concerned about the project [he’ll choose]. I want to help him and hope he chooses the fairest option. When [Zlatan] Ibrahimovic chose Barca, I had every possible doubt imaginable.”

However, Sport claims a fee may prove a stumbling block due to Raiola’s insistence on a high percentage of commission, which could see the deal balloon from the €100m mark to €270m.

Marca adds Juve will use the money recouped from Pogba’s sale to target Valencia’s Andre Gomes and Barcelona’s Javier Mascherano.