On Nov 20, 2014, Liang, a 27-year-old with only a year and a half on the job, was patrolling with his partner in Brooklyn's East New York housing project when he was startled by a noise. In a stairway that prosecutors described as "pitch-dark," Liang drew his gun and fired. The bullet ricocheted off a wall and hit Gurley on a lower level. Liang was found guilty of the killing of Gurley and was convicted of second-degree manslaughter by a jury on Feb. 11. The photos show people gathering at Cadman Plaza Park in New York to stage a protest against the conviction of a New York policeman of Chinese descent for the accidental shooting to death of a 28-year old black man more than one year ago. 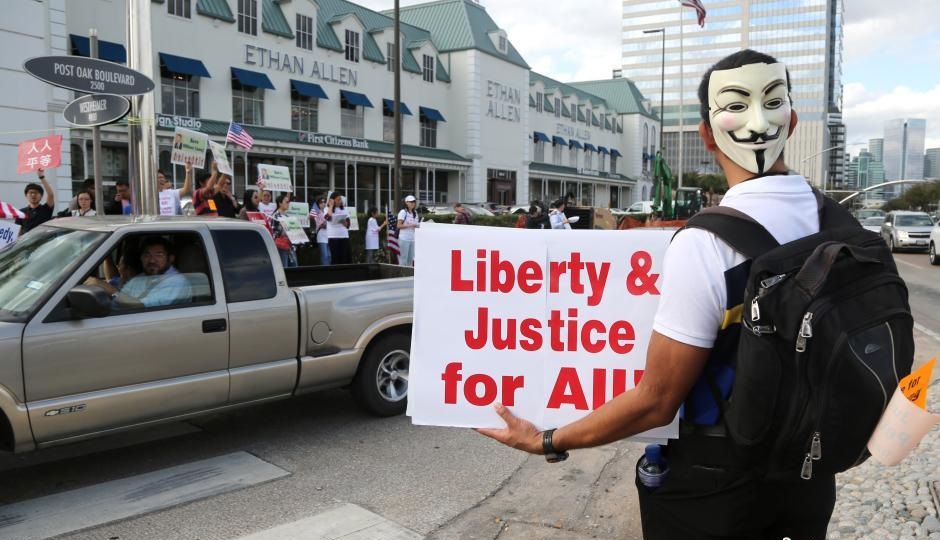 Approximately 5,000 people staged a demonstration in San Francisco Saturday. The accused New York policeman of Chinese descent has been on trial for almost a year.

In the city where the percentage of ethnic Chinese is one of the highest among major U.S. cities, thousands of demonstrators gathered initially at Justin Herman Plaza across the historic Ferry Building.

While organizers expected some 2,000 people to show up, the crowd on Saturday morning was estimated by police officers on the scene to have reached about 5,000, nearly half of them mobilized by a number of community groups at Chinatown.

A volunteer, identified herself as Kathy, from South Bay, said she felt sorry for NYPD (New York Police Department) officer Peter Liang and for Mr. Akai Gurley, the victim of Liang’s accidental shooting, and she was there for the Chinese-American community, as it mobilized for a cause, calling for fair treatment for all.

The city on the U.S. west coast has seen tensions between its African American community and the police force since Dec. 2, 2015, when Mario Woods, a 26-year-old male, was confronted by officers after slashing a stranger. He reportedly refused to drop the knife, and was then shot by as many as 15 rounds fired by five officers.

Protesters against Liang’s conviction believed this was the latest case of making the ethnic minority American a scapegoat to pay for the police brutality that has troubled the American society for a long time.

To marry unequally is to suffer equally.