Exactly on the 13th day of September, 1996, Tupac Amaru Shakur left this world in one of the most controversial celebrity deaths ever. The rap icon died at the age of 25 but left a lasting legacy that’ll live for centuries, if not forever.

According to a report from Complex, one of the most famous photographs of Tupac Shakur is the one featured on the cover of Rolling Stone magazine in 1996. The simple, yet powerful portrait captured the shirtless rapper with his hands behind his back as he stared into the camera. It was taken by Danny Clinch, a photographer who has worked with everyone from Kanye West to Johnny Cash.

TIME recently caught up with Clinch who reflected on that meeting with Tupac and the incredible response to his work.

“It was Rolling Stone magazine and I was thinking to myself, ‘Oh man, if this guy ever blew up, I would have this great photograph,” Clinch said. “What if this record is so well received that it could end up on the cover of [the magazine]?”

Clinch had originally been commissioned to photograph Tupac for a short profile story in 1993. After Tupac was shot and killed three years later, a photo from that original session was published on the cover. Clinch said he had intended to keep the photo simple in case the magazine did ever want to use it on the front page. It quickly became one of the most iconic photographs of the rapper.

“He showed up and he was very professional,” Clinch said. “He was very interested and excited to be photographed by Rolling Stone.” Clinch also explained he kept the photo shoot with Tupac loose and spontaneous so that he could really capture the moment.

“You can never really anticipate what the photo will become due to the history of the artist, and for me, I feel like I was really happy with the session that we had done, and proud of it,” Clinch added. “I just had no idea that it would turn into one of the few really solid photograph of Tupac, I feel honored to be a part of that history.”

You can check out the whole interview above.

10/31/96 – Seven weeks after his passing, Tupac was on the cover of @rollingstone for the first time. pic.twitter.com/2NBAwyjWec

On a related note, a previously unseen collection of images featuring Tupac have just been released in honor of the 20th anniversary of his death. The photos were taken by his production partner Gobi. M. Rahimi, who photographed the rapper from March 1995 until he was killed in September of 1996. You can view and shop the selection of prints here. 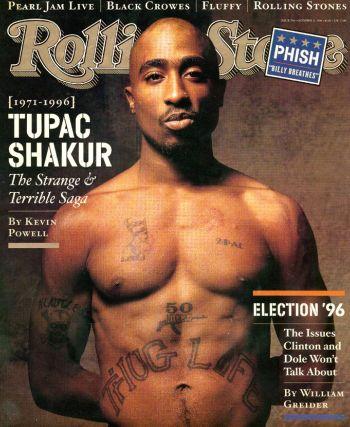 10/31/96 – Seven weeks after his passing, Tupac was on the cover of @rollingstone for the first time.