Pamela Anderson has never been in the force and the “Baywatch” star doesn’t fit the physique of a killer unless it’s a “romantic murder” probably set to take place behind closed doors, no wonder people are insinuating evil after her visit to a Swede fugitive Julian Paul Assange. 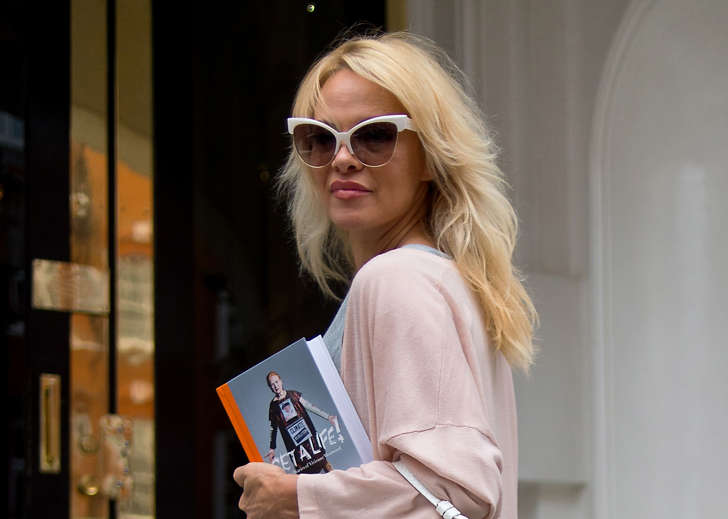 The Canadian-American actress has found herself at the center of some conspiracy theories after handing Julian Assange a vegan lunch last weekend.

Rumors have it that Pamela was on a mission to poison the Wikileaks editor-in-chief with her “tainted meal”. A media report speculated she could be working for Clinton’s campaign amid setbacks on the former Secretary of State’s leaked emails and more.

Anderson, 49, paid Assange a visit at the Ecuadorean Embassy in London where he has called home for over four years since a Swedish court issued an arrest warrant on him. He was accused of sexually assaulting two female WikiLeaks volunteers in 2010.

The suspect exhausted his legal options in the United Kingdom after fleeing to the country but didn’t want to surrender himself for extradition. Rather, he sought and was granted asylum by Ecuador in August 2012. He has remained there at the Embassy of Ecuador in London until this day, knowing he can’t step out of the premises without being arrested for breaching his bail conditions.

Assange is also facing possible espionage charges in the United States of America.

However, the  visit from Pamela, who’s a vegan and animal rights activist, aroused wide speculations that she could have murdered one of the “world’s most wanted personalities” with love.

Did you notice the book she’s holding in the picture above? Take a look again. Pamela knew this would happen and she prepared a message that says “GET A LIFE”. Sure she is not joking about that.

According to News Mic, Anderson stands solidly behind Assange as one of his most loyal supporters who has concerns for his health. She was there to give him “a nice vegan lunch and some vegan snacks,” as she told the U.K. Press Association Sunday.

“He said I tortured him with bringing him vegan food,” she added.

The actress even tweeted a pic of herself bringing him the food with the caption “#freeassange #getalife.”

But the conspiracies making rounds on social media is hinged on the “possibility” and “suspicion” that Pamela may have paid Assange a visit for different reasons, not excluding the theory that she was out to poison him and bring an end to the numerous hidden secrets held by WikiLeaks.

By far the funniest conspiracy story of the night is that Pam Anderson tried to poison Assange with a vegan meal!

Anonymous claiming Pam Anderson poisoned Jullian Assange is the most 2016 thing to ever happen.

As anyone would have expected, Assange’s Internet went down early Monday, forcing a tweet from WikiLeaks, the company he founded in 2006. The company posted on Twitter: “Julian Assange’s Internet link has been intentionally severed by a state party. We have activated the appropriate contingency plans.”

Julian Assange’s internet link has been intentionally severed by a state party. We have activated the appropriate contingency plans.

Meanwhile, most Americans aren’t in support of any likely attempt on Assange’s life.
A Twitter user with the name Ty Woods wrote: “American people should consider an attack on Assange as an attack on free speech, and an act of war against them #freeAssange.”

American people should consider an attack on Assange as an attack on free speech, and an act of war against them #freeAssange

For one Twitter user who sees Pamela as a sex object, there wasn’t a better word to describe her other than  HONEYPOT.

Pam Anderson killed Julian Assange with poison after being blackmailed into it by Hillary Clinton
— walshy (@theryanwalsh) October 17, 2016

I’m not saying “Julian Assange was just murdered by Pamela Anderson with a poison vegan sandwich”. I’m just saying other ppl are saying it.
— Our Hidden History (@OurHiddenHistry) October 17, 2016

Don’t trust unconfirmed reports of Assange being alive. The Clinton machine is capable of body doubles.

Notwithstanding the rumors flying around, Anderson claims she visited Assange only because she has concerns for his health, adding that it was nothing to do with national security.

“I really believe in him and think he’s a good person, and I’m concerned about his health, his family, and I just hope that by some miracle he’s set free,” Anderson said, according to the Telegraph.

US presidential aspirant Hillary Clinton said on October 9, 2016, during the second debate between her and Republican rep Donald Trump that Russian hackers are to blame for her controversial email leaks.

Mrs Clinton said the Russians passed those confidential files to WikiLeaks, adding that the Kremlin is working against her political ambition for Trump.

She said in a statement: “…But you know, let’s talk about what’s really going on. Because our intelligence community said the Kremlin, meaning Putin and the Russian government, are directing the attacks, the hacking, on American accounts to influence our election…And believe me, they’re not doing it to get me elected. They’re doing it to try to influence the election for Donald Trump…”

Assange wrote on WikiLeaks in February 2016: “I have had years of experience in dealing with Hillary Clinton and have read thousands of her cables. Hillary lacks judgement and will push the United States into endless, stupid wars which spread terrorism…She certainly should not become president of the United States.”