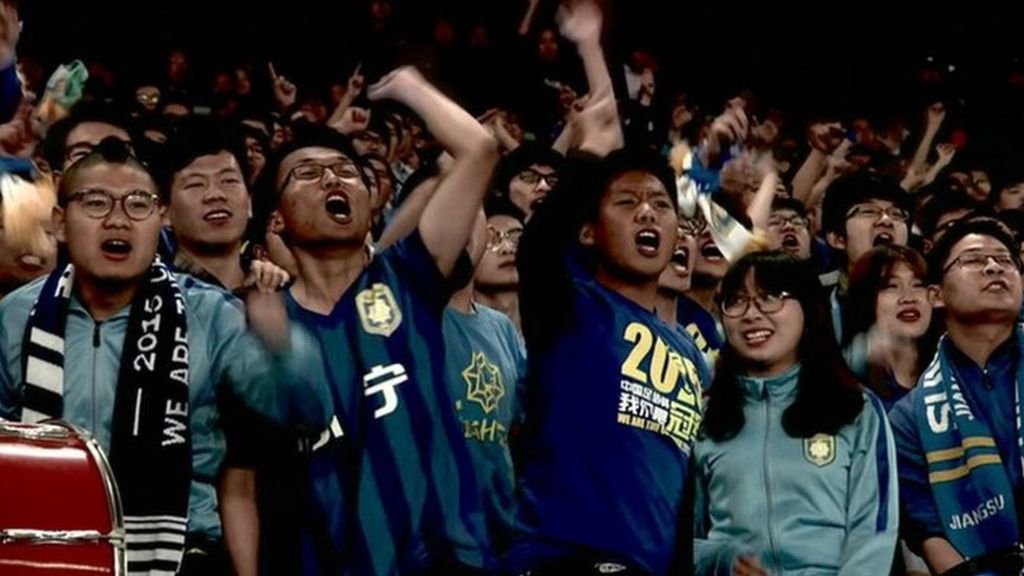 Looking at the football achievements of neighbors, Japan and South Korea, one would quickly write off China in world football. The country is currently ranked 93rd by Fifa and the citizens have little confidence in their national team but not without hopes of a better tomorrow.

China qualified for the World Cup only once though it is the world’s second largest economy.

With a large percentage of the youths more interested in basketball than soccer, the only viable change factors are: publicizing the CSL on the international stage; developing China’s football and national team; creating a very large Chinese football fan base; and encouraging companies to use overseas club sponsorship to build an overwhelming commercial presence in UK, USA and Europe.

Simon Chadwick, Class of 92 Professor at Salford University in Manchester, explained to IBTimes UK: “Central to China’s ever-increasing attraction among footballers is an ambitious, government-backed plan.

“China’s president Xi Jinping announced a goal to create a domestic sport economy worth $850bn by 2025. At the heart of this goal and the accompanying plan is the aim of hosting and winning the World Cup.”

“Xi believes this is important for China’s status in the world. Hence, very quickly, state funding is being directed towards football while entrepreneurs know they must spend in order to be seen as supporting the state’s goals. The system of football in China is, therefore, currently awash with cash,” he added.

The club just completed a successful deal with former Porto FC and Atletico Madrid’s player, Jackson Martinez at the cost of $46 Million US Dollars.

Investments in sports is expected to reach at least 1 percent of China’s GDP and the government is keen on seeing this effort bring the desired development.

Worthy of mention is Wang Jianlin whose net worth was valued at $32.7 Million US Dollars in 2015. He is a businessman, philanthropist and a former Chairman of the Dalian Wanda Group, China’s largest real estate developer. He owns 20% of the Spanish club, Atletico Madrid and recently acquired 13% of Manchester City’s parent firm. This is a welcome development for China’s football projects.

One good thing about China is, the country is good at taking calculated risks in everything it does. Be it politics or business.

These investments shall, someday open doors to Chinese young players signing contracts and playing at the world’s top clubs and leagues. “Whatever is worth doing is worth doing well, if not doing best”.

The President, Xi Jinping is a football lover. We won’t be surprised to see China bidding for World Cup soon. 2008 Beijing Olympics was a kick starter  in the venture that ended up being a money spinner for China. After that event, hosting world sports has become a recurring adventure. The economy is reaping the dividends of these exploits and is hungry for more.

Chinese companies are earning big amounts of money by bringing foreign world class players to the CSL. The time has gone when Chinese clubs pick and buy unknown players from Brazil and other parts of the world. It is strictly business now. Pay or lose.

This month, “Brazil international, Renato Augusto, 27, has joined Beijing Guoan for what is believed to be five times his existing salary”. Chinese clubs are recruiting world class footballers because they do not want a repeat of the messy episode when Nicolas Anelka and Didier Drogba left Shanghai Shenhua on allegations of owed salaries.

“There are around 25 top Brazilians in the Chinese top-flight alone, as well as Luiz Felipe Scolari, coach of last season’s national and Asian champions Guangzhou Evergrande, a side which included Robinho.

Luiz Adriano, the striker who signed for AC Milan last summer, had a deal to join Jiangsu Suning which was completed in January”.

Ramires, a Brazilian and former Chelsea FC player currently plays for Jiangsu Suning for a £25m transfer fee. It is widely speculated that John Terry will be joining him in the same club soon.

Another Brazilian, Alex Teixeira moved from Shakhtar Donetsk to Jiangsu Suning on a record-breaking transfer of fee £50 Million.

One can rightly argue that China can never win the World Cup. But who would have believed that China could catapult itself to it’s current status in world politics, education, business, science and technology?

Just as it was an elite arrangement in the past years for clubs in the Premier League – Manchester United, Chelsea, Arsenal, Liverpool, Manchester City – to finish among the best 4 and compete in the Champions League. Who knew that Leicester City would be cruising on top of the Premier League Table right now? Crushing almost everything that stands on it’s way.

Fast forward to ten years from now and Chinese football team could be, not just a contender, but a winner at the World Cup.