Over 65,000 tickets were sold for Michael Carrick’s testimonial as of 31 May, and the huge attendance on 4 June shows how Manchester United fans, friends, family and fans appreciate the veteran midfielder’s achievements at Old Trafford.

Carrick is an epitome of hard work, loyalty and commitment.

Arsenal manager Arsene Wenger said he holds regrets for being unable to have the player among his team.

The Manchester United vice-captain had stints with West Ham United and Tottenham Hotspur before joining the Red Devils in 2006.

Wenger, who spoke at the star-studded football event, expressed disappointment that he never got a chance to manage such an “underrated” midfielder.

Speaking with Arsenal.com, the Frenchman said, “I give Michael my deepest congratulations for his testimonial. I think he deserves it hugely.”

The 67-year-old continued: “I would say personally I’m an admirer of his career, of his quality.

“One of my regrets is never having had him as a player because I think he was one of the greatest players in English football.

“I believe as well that he did not always get the reward and the tribute, the recognition he deserved, but I’m an admirer of Michael and I wish him all the best for the future.”

Wenger’s statements come from the fact that after over 450 appearances for United, the player’s future at Old Trafford has been unclear.

Carrick’s contract expires this June, and it was only last week that Jose Mourinho’s employers announced that the England national footballer has been handed a one-year contract extension.

Playing among football icons — Ryan Giggs, Wes Brown, Darren Fletcher, Paul Scholes and Rio Ferdinand, among others in the game between Manchester United’ 08 XI and Michael Carrick All-Stars — he [Carrick] scored the final goal to ensure there was “no victor and no vanquished.”

John Terry, Clarence Seedorf and Michel Salgado were among the players who featured in the game.

The match was used as an opportunity to raise funds for the Michael Carrick Foundation.

Victims of the terrorism were remembered in a tribute ahead of the game, and it was an occasion to remember for the 35-year-old at United’s Theater of Dreams.

The player shared in a Twitter post all members of the two squads who played in his testimonial. 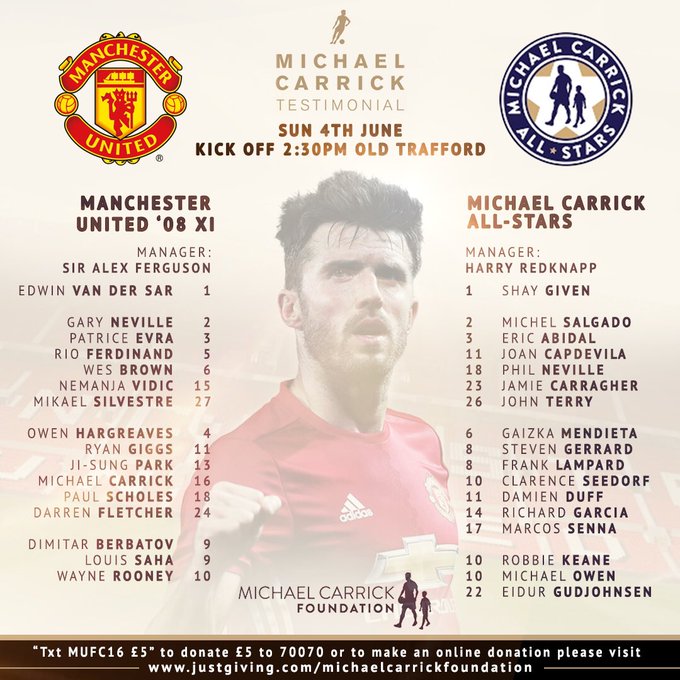