A mother and her child take a selfie with a rainbow in the background in Beijing on May 23, 2016. 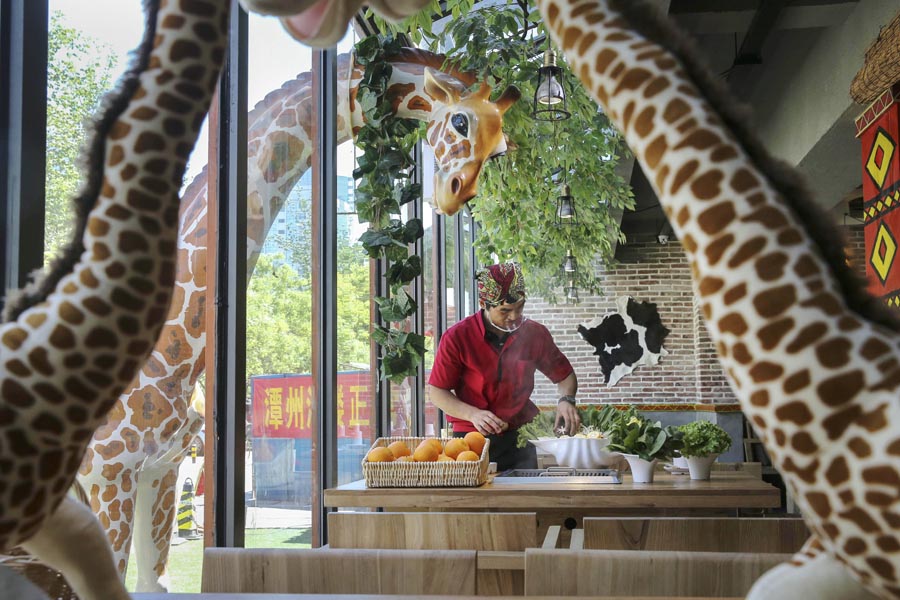 A worker prepares food at a giraffe-themed restaurant in Beijing on May 3, 2016.

Firefighters douse flames as they engulf a commercial building in Changchun, Northeast China’s Jilin province, May 25, 2016.

Foreign students viewing a “stone banquet” at a stone-themed museum in Hengyang, Central China’s Hunan province, on May 17, 2016.

Children from the village of Atuler, in the Liangshan Yi autonomous region in Southwest China’s Sichuan province, using a vine ladder to climb an 800-meter cliff on May 14, 2016. The children, aged from 6 to 15 years, use the ladder to go to and from school twice a month.

A-Tie, a nursing robot, chats with the elderly at a nursing home in Hangzhou, Zhejiang province, on May 17, 2016. The robot is controlled by a mobile phone app and can do more than just remind patients to take their medicine. They can be used for making video calls, virtual consultations, and as a portable television.

Children and parents watch robots dancing at a technology camp for youngsters at Suzhou, East China’s Jiangsu province on May 22, 2016.

Researcher Xu Zhiheng explains findings from a Chinese team studying the Zika virus in Beijing on May 11, 2016.

A group descends 40 meters from a bridge during an exercise to raise awareness of the work done by emergency rescue teams in the southwestern city of Chongqing. Local residents joined 30 professionals to take part in the activity on May 22.

Don't try to make children grow up to be like you, or they may do it.