Manchester City suffered a 2-0 loss to city rivals Manchester United in the USA, a first of their loss to The Red Devils on foreign soil, and this Thursday, Pep Guardiola’s men will pass through another test from the current UEFA Champions League winners Real Madrid.

United also won 2-1 (on penalties) against Madrid in the International Champions Cup (ICC) last weekend in California to maintain their unbeaten run since they arrived US for a pre-season tour. 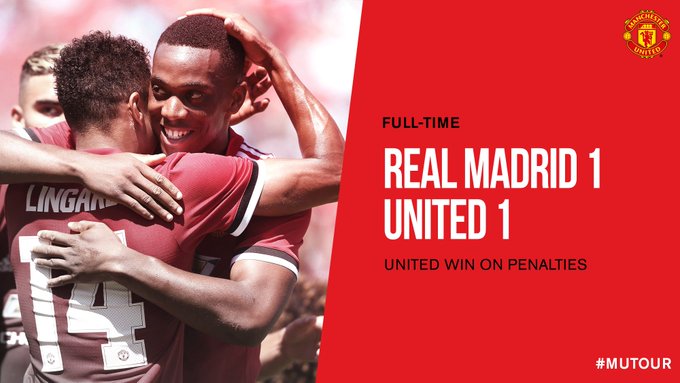 Madrid coach Zinedine Zidane carried out a complete overhaul of his men after first half, while Jose Mourinho chose to make only eight substitutions.

The Portuguese coach introduced his best legs — Romelu Lukaku and Paul Pogba, immediately after the team’s prospective captain Ander Herrera was injured five minutes into the second half.

Zidane and Guardiola are expected to spring up surprises in the upcoming game as both teams prepare for the 2017-18 football season.

City’s list of players for the match in Los Angeles include:

Bernardo Silva and Claudio Bravo were exempted from the competitions after they took parts in their countries’ Confederations Cup campaigns.

Nigeria’s Kelechi Iheanacho, Wilfried Bony, Fernando, and Fabian Delph did not travel with the squad, and speculations are rife that the footballers may be on their way out of the Etihad Stadium.

Ilkay Gundogan and David Silva are more likely to remain on the sidelines due to their fitness levels.

Madrid team captain Sergio Ramos returned to training after getting an extended time, and he will likely feature in the game despite missing out against United in their 2-1 loss.

Cristiano Ronaldo has been away since leaving Portugal at the Confederations Cup.

Here’s a list of the players who could be selected by coach Zidane :

The game kicks of Thursday morning at 4am (GMT +1).

Oddschecker says Real Madrid are favorites to win the game.

Real Madrid will play against Barcelona at Hard Rock Gardens in Miami Gardens FL. on 29 July.