BERLIN - The leaders of Germany, France and Italy urged Britain on Monday not to waste time in starting a divorce procedure with the European Union (EU), warning against uncertainty in a long impasse. 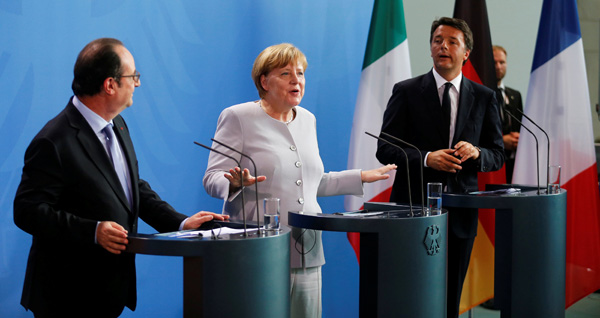 Despite a referendum result of Brexit last week, Britain's divorce procedure with the EU will only start when the country formally notify its intention to leave, activating the Article 50 of Lisbon Treaty. British Prime Minister David Cameron has said that he will leave the task to his successor when he steps down in October. British Chancellor of the Exchequer George Osborne said on Monday that Britain would trigger the exit procedure only when there is a clear view about new relations between Britain and the EU. However, German, French and Italian leaders hold the opposite idea.
Spread the love

“We agreed that there will be no informal or formal discussions on the exit of Britain until the European Council has received an application for withdrawal,” said German Chancellor Angela Merkel after talks with French President Francois Hollande and Italian Prime Minister Matteo Renzi in Berlin.

“As long as that has not happened, no further steps can be taken,” she said.

“There is no time to lose,” Hollande said in a joint press conference with Merkel and Renzi.

He urged the British government to submit a formal exit application as soon as possible in order to start negotiations.

Renzi told the same press conference that while leaders were sad about the decision of the British people, “it is a good time for Europe to write new pages”.

“I agree it must be done quickly, we must lose no time,” he added.

The three leaders also said in a joint statement that they will propose at a summit starting Tuesday in Brussels to “launch a process based on a concrete timetable and precise commitments to find solutions to the challenges that arose from the result of the referendum in the United Kingdom, and to develop concrete solutions for a better future for the EU and its citizens”.

They suggested that the remaining 27 member states of the EU should launch joint actions in securing external borders, strengthening the economy, and creating jobs for young people.

Every year, some 65,000 high school students - many of them star students and leaders in their communities - are unable to go to college or get a good job because they have no legal status.