Cristiano Ronaldo is one of the four players from Portugal who made the list in Euro 2016 Team of the Tournament, but Wales hit-man Gareth Bale missed out.

Raphael Guerreiro, Pepe, Rui Patricio and CR7 are the chosen players from the winning team. Surprisingly, Renato Sanches who was named Young Player of the Tournament, was ignored. 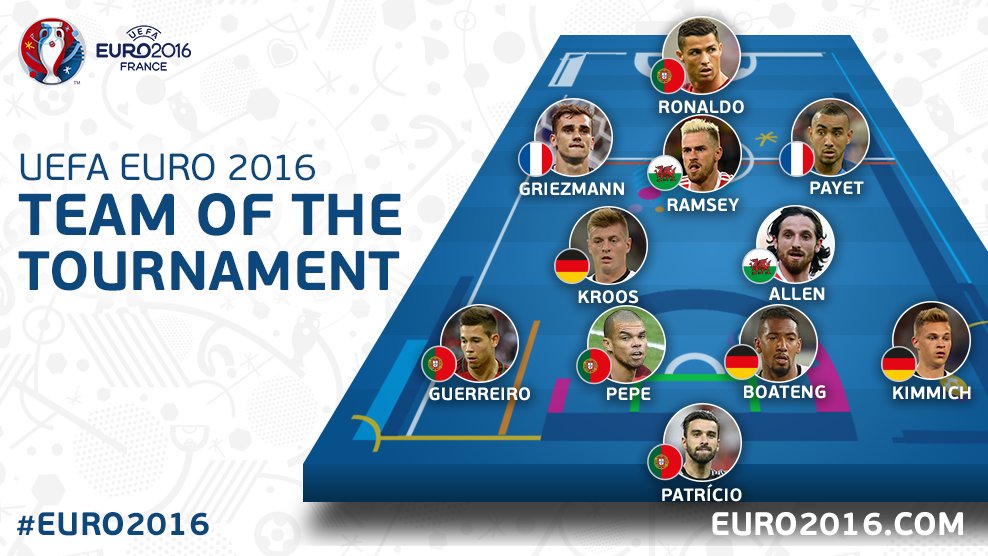 Here’s the official #EURO2016 Team of the Tournament…

In the final match against France on Sunday, Ronaldo was replaced by Ricardo Quaresma in the 25th minute after he suffered a careless hit from Dimitri Payet. However, the Real Madrid superstar was selected owing to his previous contributions in his team’s build-up to the finals.

The Euro 2016 Team of the Tournament was selected by an unbiased panel of experts.

It’s yet unclear what factors are used in the selection considering that Ronaldo’s Madrid team-mate Bale was overlooked although he scored three goals and provided one assist in Wales’ amazing performance at the tournament. Notwithstanding, the winger’s teammates– Joe Allen and Aaron Ramsey–were included in the list.

Antoine Griezmann who was named Player of the Tournament, scored six goals and created two scoring assists. Another France international who made the cut in the super XI is Dimitri Payet.

Germany are the only other nation to be represented in the selection–Joshua Kimmich, Jerome Boateng and Toni Kroos.