Pop singer Chris Brown has been arrested after a day-long standoff with the police over an alleged assault with a deadly weapon.

Police who responded to the 911 emergency call at around 3am spent hours surrounding Brown’s property in the Tarzana neighborhood of Los Angeles before obtaining a search warrant for his arrest. He was taken away from his home after police served him the papers.

Meanwhile, Chris took his time posting videos of the incident as tension soared with the police waiting to whisk him away.

“When you get the warrant for whatever you need to do, you’re going to walk right up in here and you’re going to see nothing, you idiots,” he said in one Instagram video, posted to 30 million followers.

Reports confirm that police escorted about half a dozen people out of the residence for questioning after the stand-off ended.

According to Times Union, the alleged assault victim, model Baylee Curran told the Los Angeles Times that Brown pointed a gun at her face. She said Brown and another man became angry with her when she admired the man’s diamond necklace. Curran said she and her friend ran outside as one of Brown’s associates gave chase and hid under a neighbor’s SUV.

The model was quoted by TMZ as confirming this isn’t the first time she has visited Chris’ home and spent time without any troubles. 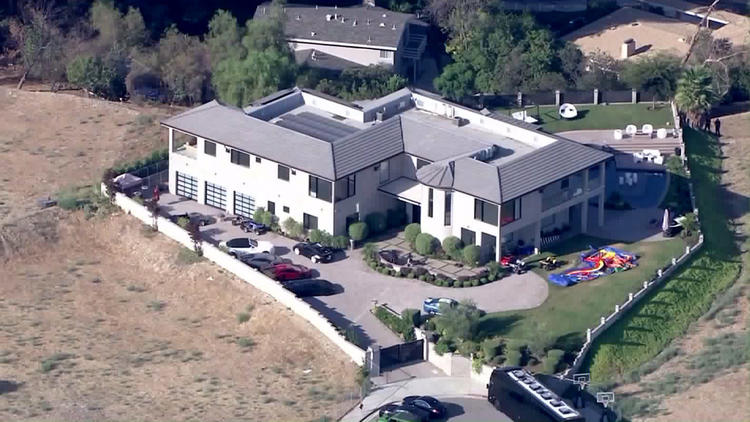 Chris, who has since claimed innocence of any offence on social media, says he never “barricaded” himself in his mansion. The pop star was seen in some short video clips he posted online, saying:

“I just wake up, all these mother f***ing helicopter-chopters is around. Police out there at the gate. … What the f*** else y’all want from me, bro? I stay out of the way; take care of my daughter; do work,” Brown said in the first video. “Somebody makes up a f***ed up allegation about me, and oh yeah, the whole f***ing SWAT team. … I’m innocent.”

“I ain’t did s***, I ain’t gonna do s***,” Brown said in the second video. “When you get the warrant, or whatever you need to do, you can walk right up in here and you ain’t gonna see nothin’. You idiots.”

“What I do care about is y’all defacing my name as a person with my character and integrity. I am a father; I am one of the best entertainers out here,'” Brown said in the third video. “I’m up at 6, it’s 7-something in the morning talking this s*** for something I didn’t do. How would you feel?”

In 2019, Chris Brown was tried in court for an alleged physical assault on then girlfriend Rihanna. He was handed a lengthy probation term with community service and domestic violence classes. The “Don’t Judge Me” singer completed his term in 2015.

He was released from custody around 11:15 p.m. after posting $250,000 bail, according to Los Angeles County jail records, LATimes confirm.

According to the report, the model claims a man was showcasing diamond bracelets, necklaces and watches inside the home while she admired the jewelry.

“I don’t know if it was Chris’ friend or how he was related, but that’s when he told me to back away from the diamond necklace and started cussing me out and calling me names,” Curran said. “That’s when Chris pulled his gun and told me to ‘Get out,’ he said. ‘I’m sick of you girls, get the F out!’”

Curran explained she fled outside with a friend, but they were forced to wait by the home’s gate until Brown’s associates retrieved her phone — which she had to hand over as a condition of entering the residence.

As events unfolded, one of Chris’ associates walked over with the phone but said he’d return it only if she signed a nondisclosure agreement, she said.

Curran said she refused but dared to snatch her phone from the man’s hand and ran away.

“The man ran to a Jeep to give chase, but Curran and her friend escaped to a neighbor’s property and hid under an SUV when the Jeep drove by,” she said. The neighbor contacted police.

6 thoughts on “Chris Brown Arrested After Long Standoff With Police.”