A runaway bus reportedly hit the streets in Glasgow with no one in control of the steering, leading to series of crashes though no life was lost.

The bus finally came to a halt after hitting several vehicles and injuring two pedestrians in the rampage. Eyewitness said there was no driver or passengers on board the First-operated bus at the time of the incident.

As of midnight July 18, Renfield Street in the area around West George Street and St Vincent Street remained closed to facilitate quick investigations into the accident, reports say.

Police Scotland has received a report of a bus having struck a male on Renfield St. Emergency services at the scene, enquiries are ongoing.

Other reports confirm that the driver in-charge of the runaway bus has been relieved of his duties pending when investigations are completed.

“I just heard a bang, looked around and saw a double-decker bus coming down Renfield Street,” he said.

There didn’t appear to be anyone in it.

A Twitter Sophia McLaren who witnessed the incident posted this picture to warn anyone who might be traveling on Renfield St in Glasgow. 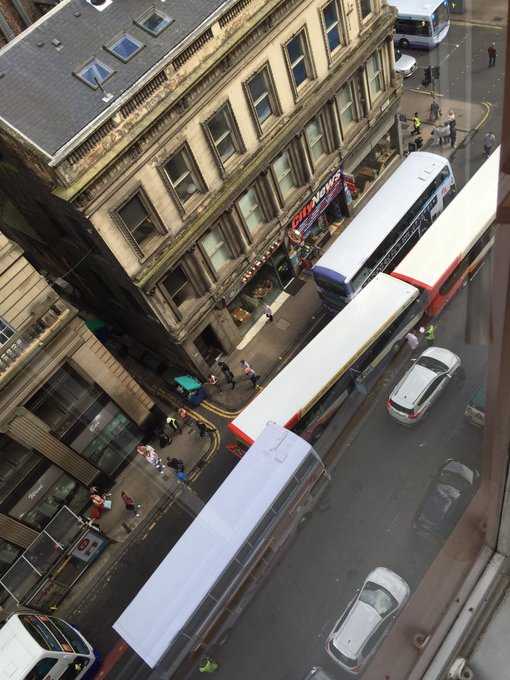 4 buses have crashed on Renfield St in town for anyone travelling in Glasgow. No traffic appears to be moving as yet

He explained: “He was running from where the old Odeon cinema was and the bus was already at the traffic lights. It hit a blue car which then hit a man crossing the road.