It’s nothing but a miracle for an Australian couple whose three children were killed when Malaysia Airlines Flight 17 was downed over Ukraine two years ago. They have welcomed a new baby.

The excited couple says the birth has given them faith that love trumps hate. They’re also saying that “the arrival of their daughter Violet May Maslin, on Tuesday, had brought them “love and light, hope and joy” after enduring two years of grief over the loss of their three children.”

Anthony Maslin and Marite Norris are from the western Australian city of Perth.

At the time, the couple said they were living in an “ongoing hell”, with the pain they felt unfathomable.

In a statement on Thursday from the Australian foreign affairs department, the couple said they believe Violet is a gift sent by Evie, Mo, Otis and Nick.

“Violet’s birth is a testament to our belief that love is stronger than hate,” the couple wrote. “We still live with pain, but Violet, and the knowledge that all four kids are with us always, brings light to our darkness. As Martin Luther King said, ‘Darkness cannot drive out darkness; only light can do that. Hate cannot drive out hate; only love can do that’.”

A Dutch civil investigation concluded that the plane was downed by a Soviet-designed Buk surface-to-air missile. All 298 people on board died. 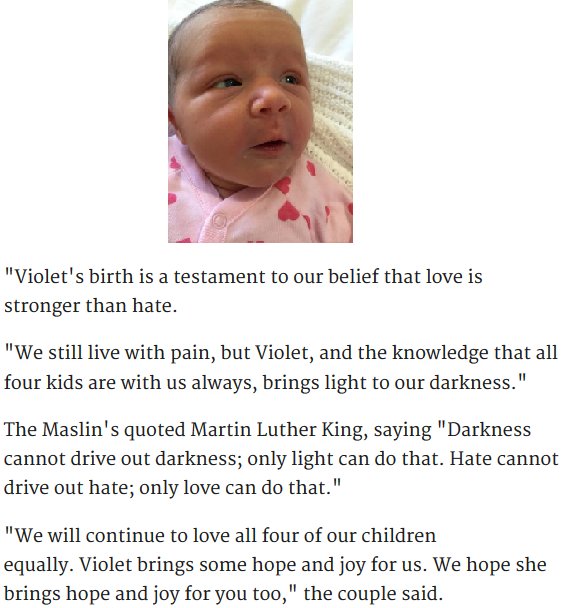 Maslin and Norris said they would continue to love all four of their children equally.