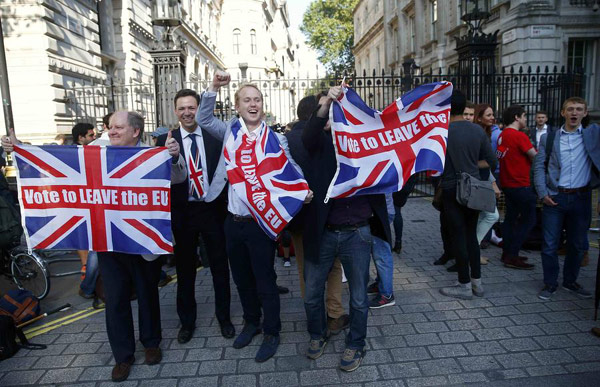 LONDON - Following are reactions from world leaders and politicians on Friday to Britain's referendum vote to leave the European Union: EUROPEAN COUNCIL PRESIDENT DONALD TUSK "We are determined to keep our unity as 27 ... I will propose that we start a period of wider reflection on the future of our union." GERMAN FOREIGN MINISTER FRANK-WALTER STEINMEIER "The news from Britain is really sobering. It looks like a sad day for Europe and Britain." FRENCH FOREIGN MINISTER JEAN-MARC AYRAULT ... said he was "sad for the United Kingdom". "Europe will continue but it must react and rediscover the confidence of its peoples. It's urgent." GERMAN FINANCE MINISTER WOLFGANG SCHAEUBLE "I had hoped for a different result. Now we must look forward and deal with this situation ... "The EU process for an exit from the European Union is clearly defined and will be applied. Europe will stand together now."
Spread the love

… called the vote a “signal from both the British voters and many other voters around Europe who feel that the EU is not providing good enough answers to today’s challenges”.

“Brussels must hear the voice of the people, this is the biggest lesson from this decision …

“Europe is strong only if it can give answers to major issues such as immigration that would strengthen Europe itself and not weaken it. The EU has failed to give these answers.”

“This is bad news for Europe, for Poland … We will be trying to use this situation to make the European politicians aware why this happened. And it happened because this concept, which was created some time ago, is no longer popular in Europe.”

“We must show people why we believe the EU is important, why we need to remain. We have to look at the things that matter in people’s everyday lives, perhaps where there have been ambiguities, where there’s been arrogance and where people have felt it’s been an elite project … It is a very serious situation for Great Britain, but also for the EU.”

“Victory for freedom! We now need to hold the same referendum in France and in (other) EU countries.”

“Scotland has delivered a strong, unequivocal vote to remain in the EU, and I welcome that endorsement of our European status.”

“(The decision) … causes major damage to both sides, but in first line to the UK … There cannot be any special treatment for the United Kingdom … ‘Leave’ means ‘leave’. The times of cherry-picking are over.”

GIANNI PITTELLA, LEADER OF THE SOCIALISTS AND DEMOCRATS IN THE EUROPEAN PARLIAMENT

“It is sad but it is not the funeral of the European Union.”

“I expect that the negotiations on the exit will now begin quickly.”

“The EU is failing, the EU is dying.”

“The European Union has failed as a political union.”

“We want be in charge of our own country, our own money, our own borders, and our own immigration policy … As quickly as possible, the Dutch need to get the opportunity to have their say about Dutch membership of the European Union.”

“That is a catastrophic result for Britain and also for Europe and Germany, especially the German economy. It is disturbing that the oldest democracy in the world turns its back on us.”

“Brexit will hurt investor confidence in Europe as an industrial centre.”

A BRITISH OFFICIAL WORKING AT THE EUROPEAN COMMISSION:

“It’s the Brussels bubble who is shocked. There were signs. Nothing has changed, it’s going to take some time before we know what will happen.”

At IBM, if we kept our same leadership for 36 years, we'd be bankrupt.