North Korea launched another long-range missile across Japan Friday morning. The Friday shot flew 3,700 kilometers at the highest altitude of 770 kilometers before crashing into the Pacific. 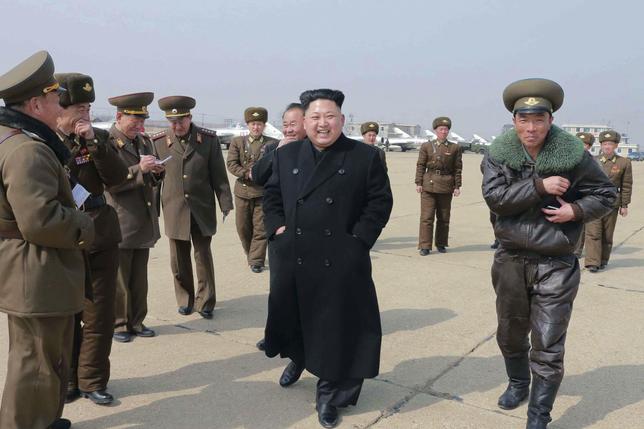 The previous shot on Aug. 29 flew 1,000 kilometers shorter with the altitude 220 kilometers lower. Both were believed to be Hwasong-12 type, intermediate range ballistic missile (IRBM). Between the two missile launches, the North conducted what it claimed was a hydrogen bomb test Sept. 3.

Why did the North fire a missile with an extended range that could reach Guam, the U.S. territory in the Pacific?

It is apparently sending the message that the next target can be Guam, home to a U.S. military base from which B1B and other U.S. strategic assets are deployed to hit the North in the event of a conflict on the Korean Peninsula. Already, the North threatened a ring of fire around the island with a fusillade of missiles in a verbal war with U.S. President Donald Trump who vowed to send a rain of “fire and fury” on Pyongyang.

Now, the Guam shot will increase pressure on the U.S. to react. The North knows that the U.S. has its hands tied because any military retaliation would result in a second Korean War that may involve the use of nuclear weapons, entailing hundreds of thousands of casualties including Americans and Japanese.

The Friday launch and the potentially subsequent Guam shot are most likely part of the North’s strategy for three purposes: first to show the world its military prowess; second to prove the futility of international sanctions and third to get a better position in the ultimate dialogue with the outside world.

As for the first, there is little influence to be exerted to have the North stop its missile or nuclear programs. Pyongyang is determined to start anew from a position of strength as a nuclear power. For the second and third, there can be a lot to do. The latest test came four days after the U.N sanctions were adopted with the support of China and Russia. The key part is to cut off 30 percent of oil supplies to the North that depends on China and Russia for all its oil needs.

In other words, the North has shown its defiance, which may be ironically revealing its vulnerability. There should be more efforts to tighten screws on the North Korean sanctions. Diminishing oil supply to the North by another 20 percent, for example, can provide a better position in talks with the North moratorium on its weapons of mass destruction and their dismantling, in return for guaranteeing the survival of the Kim regime.

One thought on “What North Korea is thinking right now”