Reports confirm that thousands of graduates from the U.S.’ top colleges flock to Wall Street, looking for jobs each year. One person who thinks the trend should change for good, is Mr. President. Obama says it quite unlikely that his pretty girls–Sasha and Malia Obama–will be among the crowd. 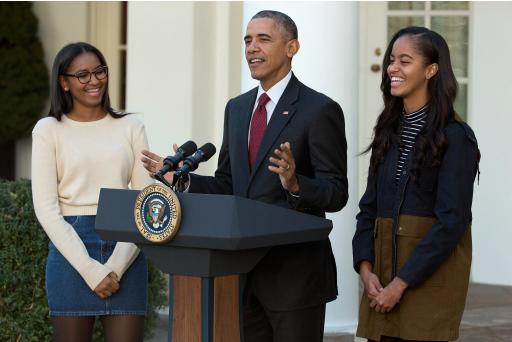 In an interview earlier this month, President Obama told Bloomberg Businessweek, “I’m pretty certain that my daughters will not end up working on Wall Street.”

According to a report, Obama didn’t explicitly discourage Sasha, 15, and Malia, 17 and headed to Harvard in 2017.

One thing is clear, the President suggested that Wall Street was draining the economy of young, vibrant and talented youths. Mr. President says Wall Street is “sucking too much air from the economy–and perhaps sucking up too much of the nation’s young talent.”

“…I do believe—and this isn’t just my bias; I think a lot of economists share this view—that if you start getting to the point where 40 percent of the economy is taken up by the financial sector and that our best and brightest are going into financial work as opposed to engineering or computer science, then we could actually lose our competitive edge over time,” he added.

The president’s admonition comes at a time when the appeal of Wall Street jobs among top graduates, which seemed to dim in the wake of the financial crisis, has seen something of a resurgence.

Earlier this month, investment bank Goldman Sachs, reported receiving 250,000 applications from recent college and business school grads for jobs this summer, up more than 40% since 2012. Other large banks including JPMorgan Chase, which hired on 2% of hopeful graduates, and Citigroup’s investment banking decision, which hired 2.7%, were also awash in applicants.

Like all parents, however, Obama seemed to indulge in a bit of ‘do as I say, not as I do.’

When asked what industries, he himself, was considering once he left the office, Obama emphasized his interests in scientific endeavors, like mapping the human genome. But he also suggested he was talking to venture capital firms, essentially investors that make bets on unproven technologies. In other words, the financial industry.

4 thoughts on “Obama Warns About Dangers On Wall Street.”