Ariana Grande’s Manchester Arena concert was disrupted by bomb explosions which reportedly killed 22 and injured over 50 persons, and celebrities aren’t smiling about the wickedness meted on innocent souls.

Concertgoers who gathered at the location to have fun were mostly teenagers, children and parents who love music.

An 8-year-old named Saffie Rose Roussos has been identified as one of the bomb blast victims. She was studying at Tarleton Primary school before her departure to the world beyond, media reports confirm.

Why is it that ISIS can’t see music as the food of love?

Although the terror group have taken responsibility for the callous act, Saffie would have wished those godforsaken religious fanatics didn’t suffer melophobia.

Headteacher Chris Upton said, “Saffie was simply a beautiful little girl in every aspect of the word. She was loved by everyone.”

There are speculations that ISIS may have no hand in the attack even though there are links — based on previous threats. And America’s Director of National Intelligence, Dan Coats, said there’s no proof yet on how the terror group was involved.

“So it once again reminds us that this threat is real, it is not going away, and needs significant attention to do everything we can to protect our people from these kinds of attacks,” Dan Coats said in a statement before the Senate Armed Services Committee today 23 May, 2017.

“Initial reports that we have received are that this was indeed a suicide attack,” Coats continued.

“Whether there were others implicated in that is under assessment.

“I might mention that ISIS has claimed responsibility for the attack in Manchester,” Coats said.

“Although they claim responsibility for virtually every attack. We have not verified yet the connection.”

The suspect who was born in Manchester, goes by the name Ramadan Abedi. He used a a homemade explosive device filled with nuts, shrapnel and bolts, the media reports.

US singer Ariana Grande had just ended her performance before the explosions went off.

Thousands of young fans and families were affected by the attack which prompted the 23-year-old musician to tweet, “broken. from the bottom of my heart, [I] am so so sorry. [I] don’t have words,” after she was lifted to a safe place.

Here’s what celebrities tweeted on the horrific incident:

I’m heartbroken over what happened in Manchester tonight.
Sending love to everyone involved. H

Absolutely Horrendous what happened in Manchester tonight. My thoughts are with the great people of Manchester and also Ari and her team xx

Sending all my love to every single family at the Manchester show last night. So upsetting

To see what has happened in Manchester makes me really sad. My thoughts are with those that are experiencing such tragedy at this time x

My daughter made it home safe from Ariana Grande last night. My heart goes out to all parents & those involved. Manchester stay strong. X

We are so saddened by the tragedy in Manchester last night. Our heartfelt thoughts go out to the beautiful Ariana fans and their families

Just saw the news about Manchester… Our hearts are breaking

Prayers for all who attended, their families, Ari and her whole crew.

#Manchester has always been so close to my heart! These are innocent vulnerable kids, this could’ve been any of us! I’m devastated!

Praying for the beautiful souls we lost, their families and loved ones, for the survivors who will forever be impacted by this #Manchester

My thoughts, prayers and tears for all those affected by the Manchester tragedy tonight. I’m sending all my love.

Praying for everyone at @ArianaGrande‘s show

every musician feels sick & responsible tonight—shows should be safe for you. truly a worst nightmare. sending love to manchester & ari

My heart hurts for my sister, Ariana & every family affected by this tragic event in the U.K. Innocent lives lost. I’m so sorry to hear this

My thoughts and prayers go out to everyone affected in Manchester.

Thoughts, prayers and my whole ❤️ are with Manchester this evening.

My thoughts and prayers are with the people of Manchester, any one affected, @ArianaGrande and the entire crew. Heartbreaking

No words can describe how I feel about what happened in Manchester. I don’t wanna believe that the world we live in could be so cruel.

Absolutely heartbroken for #Manchester. Devastating news. My love, thoughts & prayers go out to all. 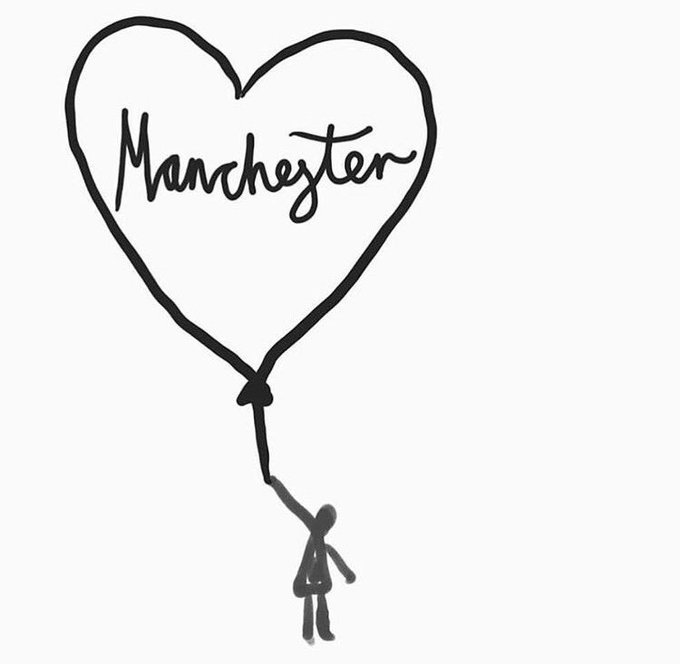