Pepe believes Cristiano Ronaldo remains the world’s best player ever, and said he’d love to sign a new contract with Real Madrid as he hopes to retire at the club he calls “home”. 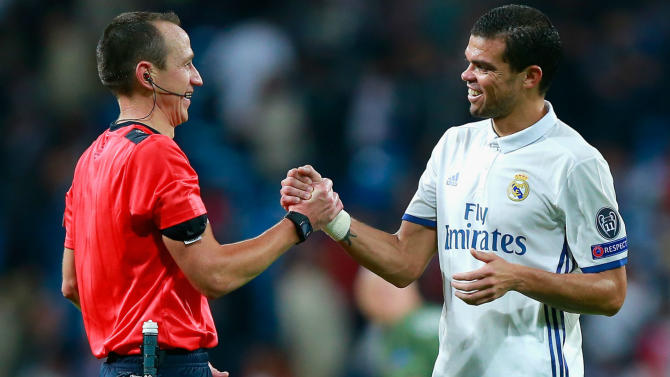 The veteran defender  told reporters prior to the 5-1 thrashing of Legia Warsaw in the Champions League on Tuesday that he’s staying with Los Blancos, squashing rumors that earlier said he’s on the brink of a move away from the Spanish capital next summer.

Pepe, 33, granted an interview to Cadena SER during an appearance at a radio programme El Larguero on Monday night, Marca confirms.

Retiring from international football: “No, I still feel able to defend Portugal’s shirt. That responsibility is what makes us work hard every day”.

Champions League: “It’s special. Our people are excited and so are we. It’s going to be really nice”.

Contract: “I’ve got this season and I am happy. I’m a very positive guy, I try to do things right so that good things happen. If I can give my best, the club will see that and hopefully one day they will call me to sort this issue out”.

Goal against Osasuna: “My wife sent me the video. I’m happy to have helped the team. We needed to change our mindset in that game. It was a 4 pm kick-off, and it was very hot out there. Osasuna play a very tough, competitive style of football. They came to the Bernabéu with maximum determination, and extra motivation at playing against Madrid.”

Zidane and Mourinho: “They’re different, almost opposites really. One’s a good guy, the other one’s the bad guy… (laughs) Mourinho has a lot of experience as a coach, he’s coached some of the best players around. Zidane only started last season, so you can’t really compare their experience. But Zidane was a player and he knows what players need, he knows our way of thinking. Not signing anyone this summer was a vote of confidence for the squad”.

Cristiano’s comments about Xavi: “For me, Cristiano is the best because I know him, he’s proved it since he’s been here and he always scores goals; he helps us and his national team…”

Does Cristiano get annoyed when anyone mentions Messi? “No. He’s got sufficient experience to let that go. There are ways of putting things, when Xavi said what he said, he forgot that there are lots of people in Portugal who love him, people in China… I don’t agree with him but I respect his opinion. Cristiano has a lot of followers”.

It’s not normal to have a contract up in the air: “I’ve got a lot of experience, and I’m not going to let my heart get in the way, I think more when I speak to referees. Since the first day I have fought to win my place and I’ve been in this game for 10 years. People value what I do and I am as enthusiastic in my job as I was on my first day”.

Would you accept a year’s extension?” Yes, I’d accept that no problem. I’m happy at Madrid, my daughter studies here… for Madrid, with me, it’s easy”.

More mature Pepe: “I can’t remember my last red card (five years ago). My Mum and my family really suffer when I get criticized. It wasn’t fair on them. In a 50:50 ball, the defender always has to win. I went for the ball but didn’t stop… I went in hard. I had bad luck in that game against Getafe, I don’t know what happened to me that night, maybe it was the pressure. I recognize my mistake but people didn’t accept it or understand it. With age, you begin to judge these things better and rectify all of the bad things”.

Did you speak to Casquero? “That was quite tough for me. When I stepped out of the stadium I realized how bad I had been – not just for the public but also for the kids who might have been watching. When I got to the changing room my wife was calling me, she asked me what had I done…I said sorry publicly and later one of the press department put me in touch with Casquero, I don’t know if he accepted my apology or not…”