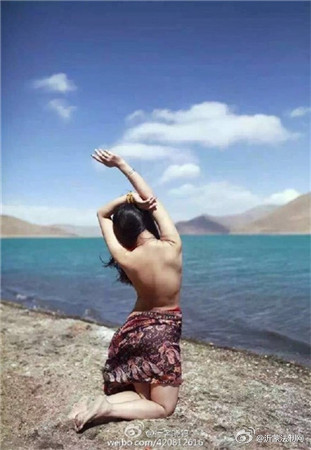 This Chinese woman whose identity is yet undisclosed by the authorities has been criticized for posing nude and taking pictures at a sacred lake in Tibet. Internet users see this as a show of disregard for the Tibetan culture and a breach of religious taboos which should need some kind of spiritual cleansing. Local police has refused to give details of the photographer who reports say has been detained for ten days together with the woman. The punishment to be meted by the police has been also kept a secret. A web user identified as "YouchumDolkar" on Weibo, posted the series of photographs on Monday night. Alongside the pictures, the woman posted a message: "A good photographer and a good model have broken cultural and ethnic boundaries." There are also other pictures in which the woman appeared stark naked.

In the nude pictures, the woman’s face was turned away from the camera. In other photos, she was seen in a red dress sitting on the shore or standing.

Some internet users are arguing that the woman did no wrong. They say it’s a kind of art that should not be seen as a violation of culture. But what kind of art must be expressed in a sacred place?

The photographer wrote on his Wechat: “The young woman said that was her first visit to Tibet and was probably the best time of her life. She wanted to have a keepsake of herself in this holy land.”

The said location is called Yamdrok Lake. It is one of Tibet’s three sacred lakes located less than 100 kilometers from the capital city, Lhasa.

Tibet Autonomous Region Tourism Development Committee said in a statement that they will “publish the relevant results after investigation.”

Should the woman be put on the government’s blacklist for her controversial behavior? Or public in accordance with the traditional laws?