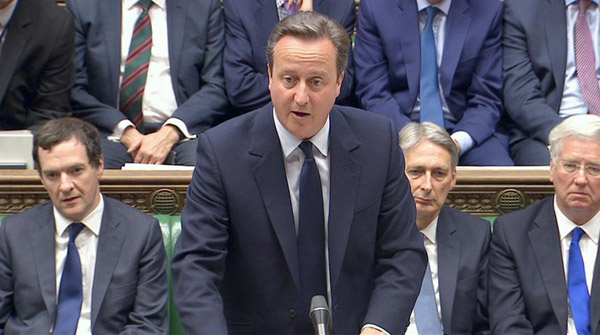 Britain could have a new prime minister by early September, the ruling Conservative Party said on Monday, after David Cameron started laying the groundwork for his successor to trigger the country's exit from the European Union. The government is under pressure to fill a vacuum left when Cameron announced he would resign by October after Britain ignored his advice and voted to leave the 28-member bloc in last week's referendum. Triggering a leadership battle which could draw in some of his closest advisers, Cameron urged ministers to work together in the meantime. But he also formed a separate unit, staffed by public servants, to help advise Britain on its departure and its options for a future outside the EU. "Although leaving the EU was not the path I recommended, I am the first to praise our incredible strengths as a country," Cameron told parliament. "As we proceed with implementing this decision and facing the challenges that it will undoubtedly bring, I believe we should hold fast to a vision of Britain that wants to be respected abroad, tolerant at home, engaged in the world."

Asked about the possibility of a second EU referendum, Cameron said the result of Thursday’s vote must be accepted.

Graham Brady, chair of the “1922 committee” of Conservative lawmakers which sets the party’s ground rules in parliament, said the group had recommended that the leadership contest should begin next week and conclude no later than Sept. 2.

That recommendation will almost certainly be passed.

“Both the Conservatives and the country more generally really want certainty. We would like a resolution and we think it would be a good thing to conclude this process as soon as we practicably can,” Brady told Sky News.

He said there should be no new parliamentary election before Britain had negotiated the terms of its exit from the EU.

Several Conservative lawmakers have urged leadership candidates to try to broker a deal quickly to make sure that any campaign is as painless as possible, and to avoid deepening divisions exposed during the referendum campaign.

“A leadership contest now is not in the interests of our country,” said Justine Greening, international development minister. “It will mean our party focuses inward at the very time our country most needs us to focus outward.”

Age is whatever you think it is. You are as old as you think you are.