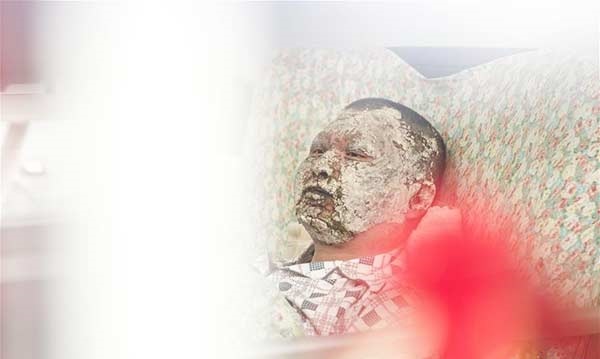 Soldiers, including police officers go an extra length protecting us while we go about transacting our daily businesses. Little do we know how much they suffer for us to have protection. They stay awake in cold, rainy or hot weather while we sleep. A lot of people have never taken time to appreciate these officers when we celebrate Christmas, New Year, or Easter. Most people don't care about how they are fed or looked after but we demand the impossible from these good-hearted gentleman and ladies.

In a country where an average soldier earns less than civil servants, what would you expect? Bribery and corruption, in most cases, robbery. In such a society, how do we expect soldiers to risk their lives for the citizens.

Most countries are beginning to realize the need for a better welfare package for every employee in the force. A country cannot protect it's citizens or maintain it's sovereignty without soldiers. Wu Jun, a special duty member in Hubei, has no regrets about the choice he made recently when he jumped on a flaming bomb to stop it from harming others while risking his life in the process.
Spread the love

He received an order as he was on patrol at about 9:00 am, informing him that there were blasts in Baota village, Qingquan town, Xishui county, Huanggang city, Hubei province.

When Wu Jun arrived at the scene with his teammates, he found the local police in a stalemate with a man in an adobe house who kept throwing explosives out of the house to attack the police.

The man, 42, coincidentally named Wu, held a grudge against a woman who jilted him and consequently, he hit her father’s head hard for no reason.

He then ran back to his house when police came to arrest him.

There he wore a home-made bomb on his chest and twined the lead around his body as he kept throwing bombs out of the house to stop police from coming in.

At the same time, the suspect’s sick mother was in the neighboring room, and there was a risk that she would get hurt by a blast. Wu was attempting suicide.

After a long negotiation with the police officer in charge, the suspect became more and more emotional and unstable.

The soldier, Wu Jun made the decision to break down the rear door and get the suspect under control to avoid causing the explosion and the collapse of the house.

But the suspect lit the bomb lead once he saw Wu Jun and others coming toward him.

Wu Jun threw his body on the lead and tried to put out the flame while he struggled with the suspect to dismantle his bomb.

The suspect was resistant and tried to stab Wu Jun with a dagger. More people came in and pinned the suspect on the floor.

In the chaos, the bomb lead burned out and Wu Jun threw himself on the bomb to decrease the impact of the bomb.

Wu Jun was severely injured while others including his teammates, the suspect, and the suspect’s mother were unhurt.

Wu Jun was soon admitted into the hospital.

According to the local doctor, he has more than thirty injuries on his stomach, back and face.

Wu Jun’s wife was worried after receiving the news that her husband was injured.

She said, “He’s devoted to his job. I was worried as his wife but I support him. He doesn’t regret his choice and I don’t, either.”

Indeed, soldiers are not humans. You must have a heart of gold to be a “good soldier”. Don’t you agree?

We always have dinner together as a family - even when our schedules are totally hectic. I inherited that from my mom, who would come home from her ad agency job to eat with us before going back to work.