The government of Ecuador has confirmed that 7.8-magnitude earthquake struck the country's Pacific coast on Sunday. 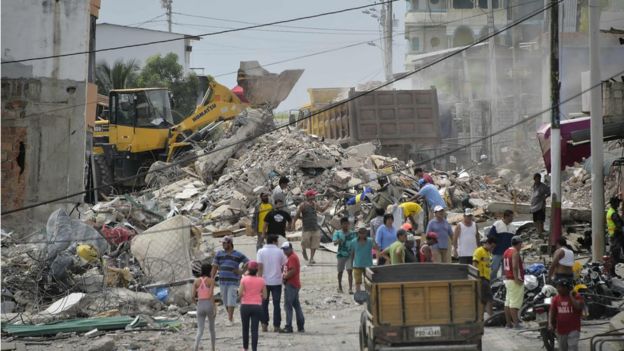 At least 413 people are confirmed dead and the number is still rising while search and rescue operations continue.

In an urgent assistance, the secretary general of the Organization of American States, Luis Almagro said; “some of the group’s rarely used emergency funds would be unlocked and given to Ecuador to help it rebuild.”

The country’s President Rafael Correa said during a visit to the worst-affected region that; “The cost of rebuilding is likely to be in the billions of dollars.

He added that; “it was the biggest tragedy to hit Ecuador in the past seven decades. Some 2,500 people were injured.”

The president continued in a televised speech, “I fear that figure will go up because we keep on removing rubble.

“There are signs of life in the rubble, and that is being prioritized.”

Luckily, rescuers were able to save six people (including two girls – one three years old and the other nine months old) from the ruins of a hotel near the coastal town of Manta late on Monday.

Bereaved families are already holding funerals for some of those killed. The two towns – Portoviejo and Pedernales – were the worst hit.

The quake comes at a time when the oil-producing country is already progressing from the slump in global crude prices.

I'm getting to a point where everything is becoming streamlined in my life. I'm learning how to stand onstage for two hours and play in front of thousands of people as if I am completely in the moment every moment.